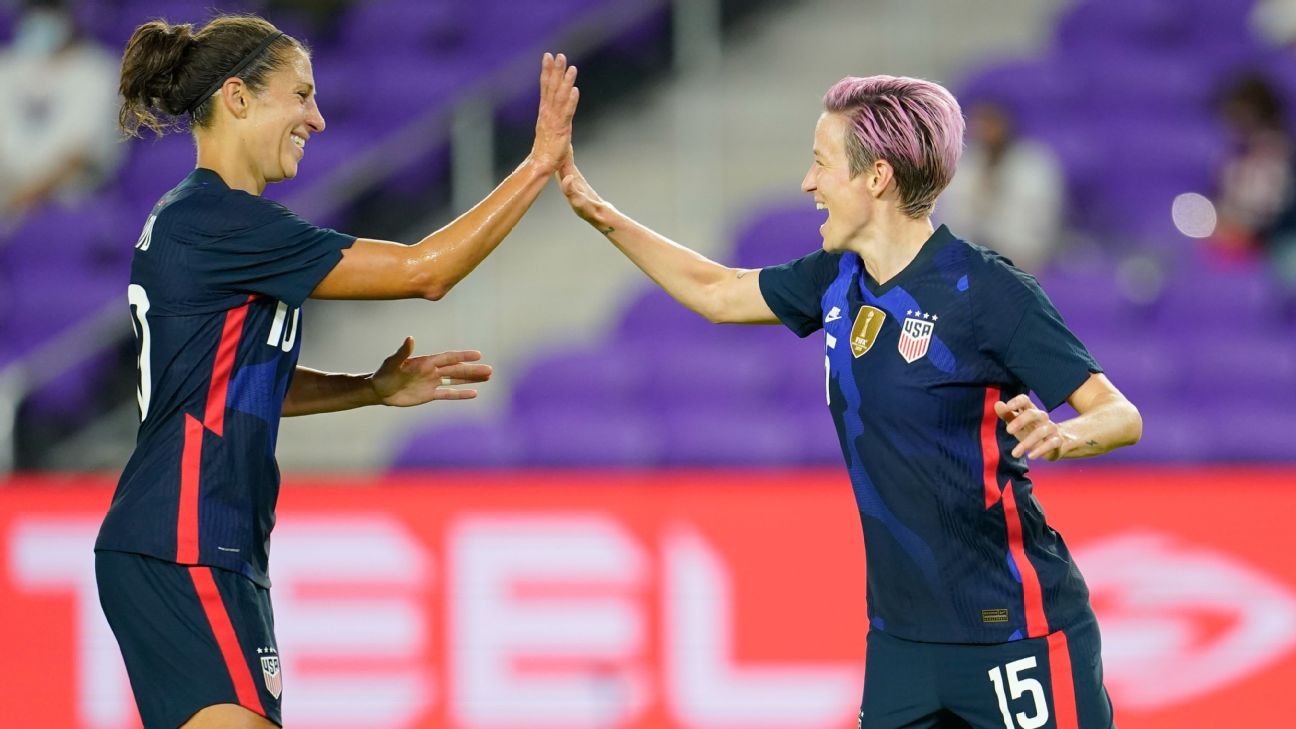 The players don’t seem to particularly enjoy when reporters ask about it, but the possibility hangs over the Tokyo Olympics all the same: For the icons of the U.S. women’s national team, this might be their last hurrah before they hang up their cleats for good.

It’s a possibility that seems to come up with every major tournament that the women’s team competes in, a byproduct of the number of stars on the team and the longevity of their careers. This time, those questions have mostly been directed at Megan Rapinoe, who turned 36 earlier this month, and Carli Lloyd, who last week turned 39.

While they have been noncommittal about what they plan to do after the Olympics, Rapinoe and Lloyd will be leading a team that has some important young players but is still heavily relying on its veterans.

For anyone searching for a reason why the U.S. team might not be the gold-medal favorite, the average age of the team’s core — 30.8 years old for the initial 18-player roster — offers a glimpse of vulnerability. The team will need to play three games in just six days through the group stage, a grueling gauntlet that seems to favor the younger teams in Japan.

Well, it’s a nice theory anyway. But anyone who has watched the team will have reason to doubt it.

“I don’t look at players by age, because there are so many other things we look at before we see how old they are,” U.S. coach Vlatko Andonovski said last month. “The most important thing is whether they perform or not, whether they’re going to be able to help us win the Olympics or not.

“We do look at data, and every data [point] we get from a physical perspective, they’re hitting all the numbers that they need to fulfill the tests we believe are going to be given to them,” he added. “On top of that, you can look at the statistical data, you’ll see that Megan Rapinoe has scored the most goals in 2021, and Carli Lloyd has the most assists.”

For Lloyd, the doubts based on her age, not her form, have clearly annoyed her, but not as much as when they came from her own coach, Jill Ellis, who denied Lloyd a starting role at the 2019 World Cup. Lloyd openly disagreed with the decision. Coincidentally, Lloyd plays best with a chip on her shoulder, which she certainly has going into this Olympics.

Rapinoe, meanwhile, has seemingly started to embrace what a post-playing career could be like, expanding her profile in the realms of entertainment, fashion and social justice. That well-rounded approach figures to only make Rapinoe more, well, Rapinoe-like on the soccer field. She was at her most outspoken at the 2019 World Cup, talking less about soccer than perhaps any tournament before, and also played with her most confidence ever.

Becky Sauerbrunn, the U.S. team’s captain and most reliable defender, is 36, and could also be embarking on her last major tournament. As former national team coach Anson Dorrance told ESPN recently, however, “the first five yards are played with your head,” meaning Sauerbrunn’s experience and expert positioning should make up for losing a step of speed — an attribute Sauerbrunn has never primarily relied on as a defender anyway.

Meanwhile, U.S. team’s best attackers are all veterans over the age of 30. Tobin Heath is 33. Christen Press and Alex Morgan are 32. The lone exception is 28-year-old Lynn Williams, who initially made the roster as an alternate before the International Olympic Committee and FIFA allowed alternates to join the full roster.

The only part of the field where the U.S. team’s likely starters are all under 30 is the midfield — and that is crucial for helping the team play with the right balance. Rose Lavelle is 26 and playing in her first Olympics. Lindsey Horan is 27, Samantha Mewis is 28, and Julie Ertz is 29.

While the team’s superstar wingers and strikers tend to get the attention for their sensational goal production over multiple tournaments, its relatively new central midfield has, in many ways, been the catalyst for the its utter dominance, particularly at the 2019 Women’s World Cup.

As a trio, the U.S. midfielders dictate games, whether it’s flying into challenges and winning the ball to start counterattacks or delivering key line-breaking passes that put the team into the final third. These central midfielders have the legs to run a ton, darting into the box to create attacking advantages or racing back to help the defense when it’s under pressure.

What’s more, when the Olympic rosters expanded from their original 18 players to 22 by allowing alternates to play in any game, no team gained an advantage more than the U.S. team. There is not a side with more depth in the Olympics, and being able to swap players without losing much in terms of quality could be a deciding factor in Tokyo. When Andonovski selected 21-year-old Catarina Macario as an alternate, he surely did not expect her to play in Japan. But now that she can, the team has added even more youth and exuberance to its midfield.

So, the U.S. team’s higher average age relative to the competition may not matter immediately in Tokyo, but what about afterward? If this is the last hurrah for Rapinoe and Lloyd, the question is: Who will be coming up, ready to play behind the likes of Morgan, Press and Heath, all three of whom will be in their mid-30s at the next World Cup?

For a time, it seemed like Mallory Pugh was the future of the team after she became the youngest American to score at an Olympics in 2016 at the age of 18. But the now-23-year-old has struggled with injuries and form, losing her spot as a regular call-up.

Midge Purce, 25, barely missed out on joining the team in Japan as an initial alternate, but national-team coaches have never really seen her as the forward she is, instead preferring to utilize her as a converted full-back. Ashley Hatch, 26, or the even-younger prospects Sophia Smith, 20, and Ashley Sanchez, 22, are viable options who have been finding success in the NWSL, but are ultimately still unproven at the top level.

That, of course, is the concern whenever the U.S. team looks to move beyond one of its veteran players, whether it was Abby Wambach at striker or Hope Solo at goalkeeper: Sometimes it’s hard to imagine someone else filling that role until it happens. And sometimes there are some growing pains until the right replacement is found.

Worryingly, for all the team’s dominance at the senior level, the Americans have struggled in the youth ranks in the past several years, raising questions about how strong that talent pipeline will continue to be. Both the U20 and U17 national teams crashed out of their most recent World Cups in the group stage, setbacks that have been part of a bigger trend.

But the U.S. team may not need to find its next generation of talent anytime soon. After all, the team had the oldest average squads at both the 2015 and 2019 World Cups and it won both. This squad does include a lot of veterans, but there’s little reason to doubt the players can keep going.

If this is going to be the last tournament for any players — whether it’s Rapinoe, Lloyd, Sauerbrunn or anyone else — then they can try to prove the doubters wrong, and just might go out with gold.