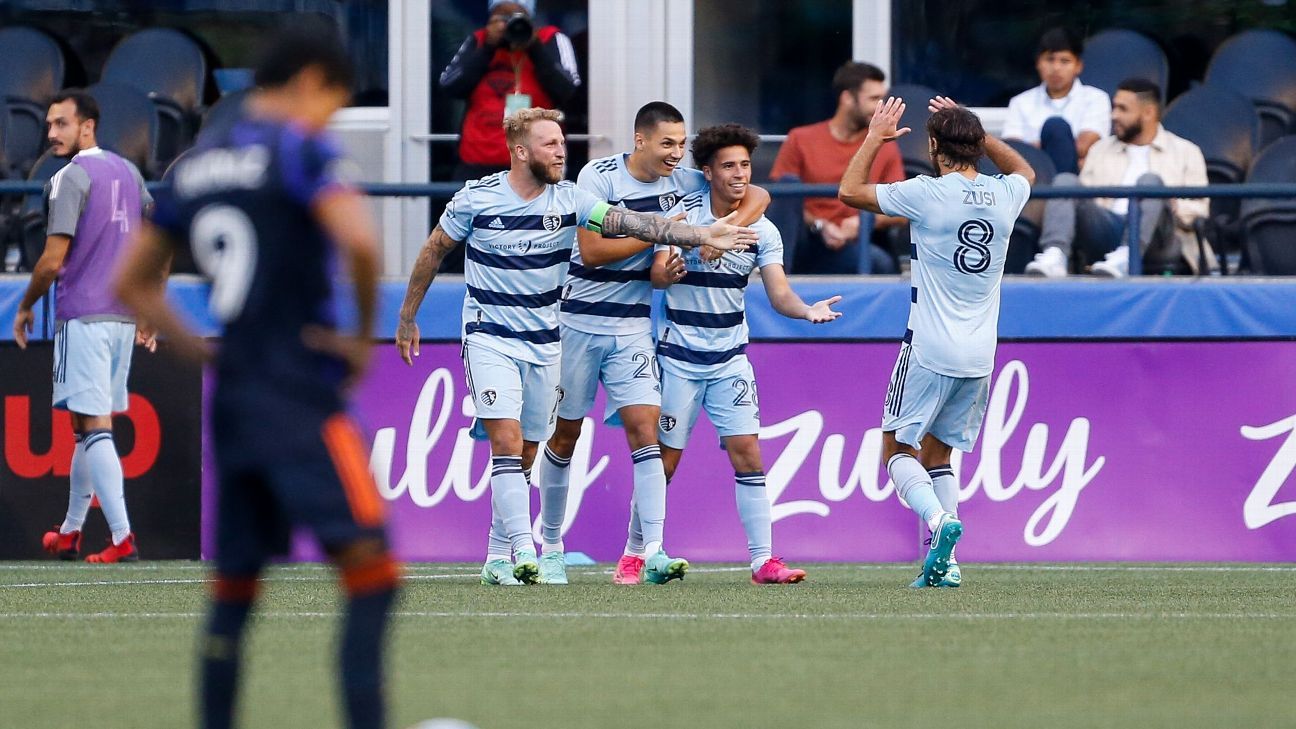 It was a wild week for Major League Soccer thanks to two full rounds of matches and plenty of eye-catching results up and down the standings. In the Eastern Conference, the rampant New England Revolution put some daylight between themselves and the chasing pack of Nashville SC, Orlando City SC and the Philadelphia Union with two impressive wins. In the West, Sporting Kansas City showed they’re a legitimate force after topping the previously dominant Seattle Sounders in a top-of-the-table showdown on Sunday night.

So let’s get caught up with the rest of the action and see where your team sits in our Week 12 Power Rankings.

SKC needed to grind out a 1-1 draw with San Jose before reverting to their best form in an impressive 3-1 win against Seattle to close out the week. Jake Russell, Daniel Salloi and Cameron Duke all scored, handing the Sounders their first loss at home this year. — Bonagura

The Revs got back in the win column in a big way with a 5-0 walloping of Inter Miami and a tense 2-1 win over Montreal, although hopefully Adam Buksa‘s head injury isn’t too serious. Playmaker Carles Gil continued his quest to eclipse Carlos Valderrama’s single-season assist record of 27, upping his tally to 13. — Carlisle

After beating Austin FC, 1-0, on an incredible goal from Raul Ruidiaz and with a starting lineup that featured five teenagers during the week, Seattle’s second loss of the season came to top-ranked Sporting Kansas City, 3-1, on Sunday night. — Bonagura

Last week, it was goals. On Saturday, it was assists for Hany Mukhtar, who benefited from some sharp runs and finishes from C.J. Sapong, in Nashville’s 3-0 win over Cincinnati. After that, a midweek road draw at Columbus showed NSC continues to be a tough team to break down. — Carlisle

Minnesota’s four-match losing streak to begin the season feels like an eternity ago considering it’s since climbed to No. 6 in the Western Conference standings. The Loons picked up three points on Saturday with a 2-1 win against Portland as Chase Gasper (74′) and Robin Lod (85′) scored late goals after falling behind early. — Bonagura

Darlington Nagbe‘s streak of never losing to one of his former clubs remains intact after the Crew disposed of Atlanta, 1-0, on Saturday thanks to a Jonathan Mensah goal. Goalkeeper Eloy Room delivered some sharp saves as well to give Columbus a solid result on the road. — Carlisle

Still without Sam Vines, Jonathan Lewis and Kellyn Acosta, who are with the USMNT as they contend for the Gold Cup, the Rapids’ four-match unbeaten streak ended with a dismal 3-0 loss at Real Salt Lake. — Bonagura

LAFC’s three-match winning streak came to an abrupt end with a 2-1 loss to Portland and a 2-2 draw with Vancouver. The good news for LAFC is that a new forward should be added to the roster soon as it closes in on a deal for Colombian Cristian Arango from Millonarios. — Bonagura

NYCFC’s sharp play hasn’t always gotten results, but this week it was rewarded with wins over Montreal and a rout of Orlando City. Jesus Medina bagged his seventh goal of the season, bettering his previous single-season career high of six in 2018. — Carlisle

Montreal’s fortunes changed in a hurry, as a pair of losses to NYCFC and New England brought Wilfried Nancy’s side down to earth after a three-game winning streak. An away match at Miami seems a prime opportunity to get back to winning ways. — Carlisle

So is one point from two games this week a blip, or a sign that perhaps the offseason departures are beginning to tell? Manager Jim Curtin called his Union good but not great, which feels about right. The return of Andre Blake from Gold Cup duty will certainly help. — Carlisle

A 5-0 blowout loss to NYCFC made for rough viewing, although it must be said Orlando was shorthanded with Nani, Junior Urso and Chris Mueller among the absentees while Mauricio Pereyra was suspended. At least the 2-1 win over Philadelphia the previous Thursday meant the week wasn’t a total loss. — Carlisle

After erasing a 2-0 deficit to pick up a point at Real Salt Lake midweek, the Galaxy responded with a 4-0 loss to FC Dallas, nearly matching their worst defeat in franchise history. It’s hard to know what to make of them as they’re not nearly at full strength due to international call-ups. — Bonagura

Julian Gressel was a pressing machine against the Red Bulls, and his ball-seeking ways helped set up Ola Kamara for the game’s only goal. A comeback draw earlier in the week against Chicago made it a successful week for the Black and Red.— Carlisle

The Timbers experienced a pair of extremes last week, getting a stoppage-time goal from Felipe Mora to beat LAFC, 2-1, only to lose to Minnesota, 2-1, on a pair of late goals. — Bonagura

Bobby Wood scored his first MLS goal and Rubio Rubin added his fifth of the season as RSL beat Colorado, 3-0, building off a midweek draw with the Galaxy. The four points from the week have put Salt Lake in the final playoff spot in the Western Conference. — Bonagura

Following a promising road draw at Toronto earlier in the week, as well as the return of Caden Clark to the starting lineup, “flat” was the operative word around a tepid Atlantic Cup defeat to D.C. United that featured just one shot on goal for the Red Bulls. –Carlisle

Toronto extended its unbeaten streak to four games with a tie against the Red Bulls and a smash-and-grab win against Chicago. So after getting outplayed in both games, is the run under Javier Perez a mirage, or is it for real? Given Gold Cup absences around the league, there’s a chance Toronto can continue to get results. — Carlisle

After taking a 2-0 lead against LAFC on Saturday, it looked like the Whitecaps would take six points from the two LA teams in a span of three matches, but Vancouver couldn’t hold the lead. The Whitecaps have lost just once in their past five, including a scoreless draw against Houston on Tuesday. — Bonagura

At 18 years and 196 days, Ricardo Pepi became the youngest player in MLS history to score a hat trick as FC Dallas hammered the Galaxy, 4-0. FC Dallas hasn’t had much to celebrate this year, but 18-year-old Pepi’s rise to become one of the best strikers in the league — he ranks third, with eight goals — certainly qualifies. — Bonagura

It was a familiar week for the Dynamo, with draws against Vancouver (0-0) and San Jose (1-1) taking their total to eight in 15 matches this year. Considering those opponents both sit in the bottom three of the Western Conference standings, it was a significant missed opportunity for Houston to move closer to the playoff line. — Bonagura

The Fire just can’t get out of its own way. Chicago completely dominated Toronto at the weekend, only to lose 2-1. This was after blowing a 2-0 lead to draw in midweek against D.C. United. It’s still head-in-the-hands time in the Windy City. — Carlisle

After a two-week break, Austin FC returned to drop a 1-0 match against Seattle. But this wasn’t a loss to the Sounders in the traditional sense because the visitors started a league-record five teenagers in an obviously rotated lineup. — Bonagura

That modest two-game win streak at the end of June is a distant memory after a home draw against Atlanta and a shellacking at the hands of Nashville that now has FCC winless in five. Jaap Stam says he needs reinforcements. Even if he gets them, it’s difficult to see how it will be enough to turn things around. — Carlisle

A 1-1 draw with Sporting Kansas City is an objectively good result for a team in as poor of form as San Jose is, but that SKC scored a late equalizer on what amounted to an effort play stings. The Quakes’ 1-1 draw against Houston on Saturday extended their winless streak to 11 matches. — Bonagura

There was a buzz at Saturday’s game against Columbus, and not just because Kanye West was in the house. With encouragement from interim manager Rob Valentino, there was an uptick in Atlanta’s attack this week. Alas, it didn’t translate into much more production on the scoreboard, as the Five Stripes settled for a 1-1 draw in midweek against Cincy and fell 1-0 at home to Columbus. — Carlisle

As draws go, the 1-1 stalemate with Philadelphia looks like two points dropped. But after getting hammered 5-0 by New England just days earlier — a game that seemed to break local commentator Ray Hudson — the hope is that the Herons can only go up from here. — Carlisle