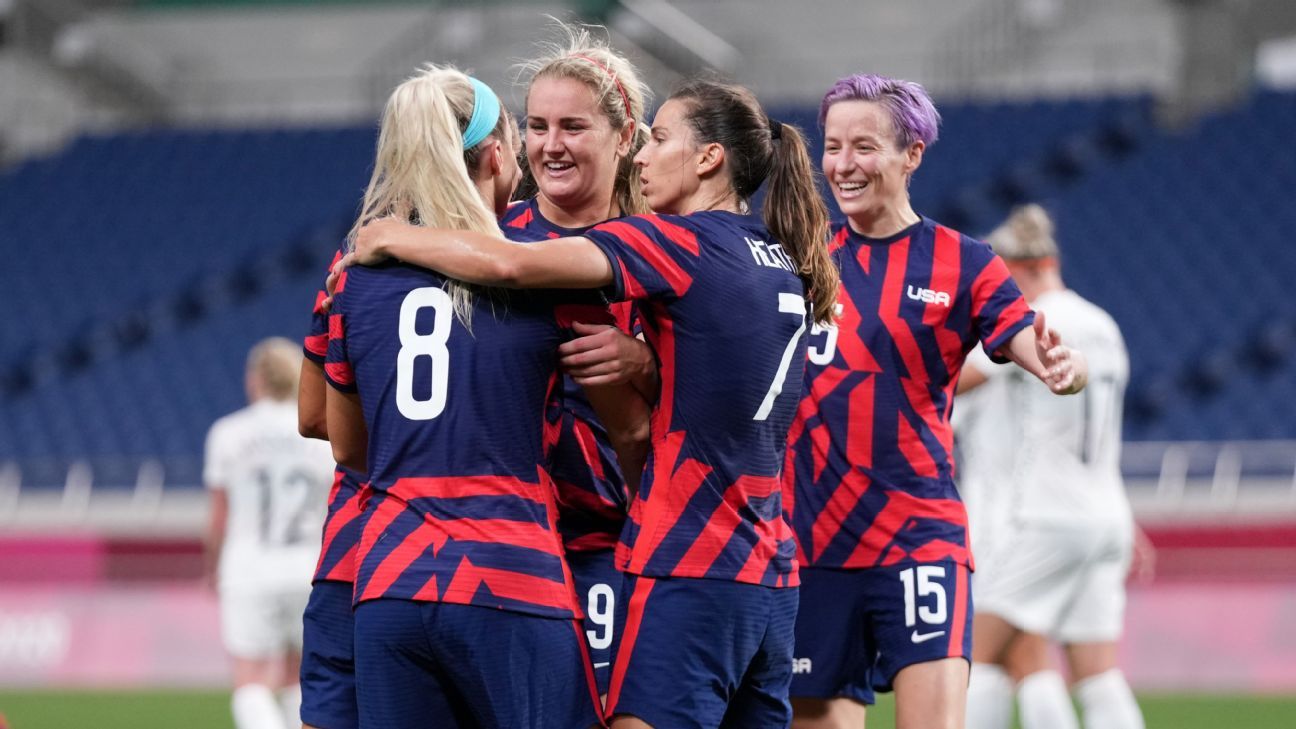 The U.S. women’s national team can breathe a big sigh of relief after beating New Zealand by a comfortable 6-1 score in Saitama on Saturday.

The win is enough to neutralize the threat of crashing out of the 2020 Tokyo Olympics, which looked surprisingly real for the USWNT after their shock opening loss four days ago. But in truth, the score line against New Zealand was more flattering than the performance itself. The Americans looked better, to be sure, but the concerns raised by the opening loss to Sweden don’t appear to be in the rearview mirror just yet.

The USWNT came out looking more aggressive, but also a bit jittery, eventually having four possible goals called offside in the first half because players were “a little bit impatient,” according to U.S. manager Vlatko Andonovski. Through the anxiety to score the first goal and then pad the score in case goal differential is needed as a tiebreaker, the USWNT still didn’t look fully like itself.

In the end, the Americans benefitted from what felt like limitless space and time, a gift given to them by New Zealand. In the few moments New Zealand tried to press, they lacked the coordination and, frankly, the bravery of Sweden, leaving spaces for the Americans to play into. It didn’t take long for New Zealand to give up and simply sit deep, giving the U.S. all the time they need to set up and play as planned.

With that extra breathing room, the uncharacteristic sloppiness shown against Sweden was gone, and the USWNT moved the ball well at times, using one-touch passes and overlapping runs to create nice interplay. Of their six goals scored, two were New Zealand own goals, but the others showed the USWNT’s deadliness on counterattacks – at least when they have the pockets of space to play into.

Rose Lavelle scored first in the ninth minute on a quick transition as Tobin Heath cut a ball into the box for Lavelle’s run, giving the OL Reign midfielder the opening she’d need to finish. The fourth goal was perhaps a quintessential USWNT goal: Julie Ertz picked up her head in the midfield and saw Christen Press racing into the box — the cross followed, as did a touch to bring the ball down and a confident strike, all before the defense could close in.

As Andonovski noted after the Sweden match: “It felt like we lost the ball way too many times before we even started our build-up, before we even established our structure to start the build-up.” There were no such problems against a New Zealand side that was never going to pose similar problems due to boasting less talent and lacking sufficient preparation coming into this Olympics.

But even with the freedom to play how they wanted, the Americans didn’t quite show the ruthlessness the players promised after the Sweden game. The Americans did not come out and simply crush New Zealand; perhaps that would be unfair to even expect, except for the fact that it’s what the Americans did in nearly every game of the 2019 World Cup.

Indeed, that the USWNT’s story so far in Japan is one of overcoming struggles is perhaps surprising when looking at the players Andonovski brought. This is very much a “run-it-back” roster of players who steamrolled their way through France at the 2019 World Cup. But the magic of that group simply isn’t there and the USWNT’s performances, even in their 6-1 win over New Zealand, have felt different.

“It wasn’t our best performance in game one, and we came into game two knowing that we don’t go from being a really great team two days ago to not being a great team anymore,” Crystal Dunn said after the New Zealand game. “We just came in a little bit more relaxed and trusting each other.”

Kathleen McNamee analyzes the USWNT’s 6-1 victory over New Zealand at the Tokyo Olympics.

Dunn has a point. But has the USWNT gone from being a really great team two years ago to not being a great team anymore? That also seems unlikely: in their last 46 games, the USWNT has still only lost once, which was to Sweden a few days ago. But if the U.S. wants to reach the gold medal match, as they have in every Olympics other than 2016, they will need to play better.

The Americans did look out of sync in the attack at times, with their four offside goals and several other offside calls, but the fluidity improved as the game went on. Defensively, however, they again showed vulnerability in tracking runners into the box, with New Zealand’s lone goal the proof that it’s something that will need to be addressed sooner or later. It was a problem a few days ago, and a problem again on Saturday.

There’s no simple fix. Abby Dahlkemper was culpable on the goal, and she struggled against Sweden as well — a surprising trend given her top-shelf play for both club and country. She can be replaced in the lineup, but the back line has left surprising gaps all over the place, suggesting it’s a cohesion issue more than a personnel issue.

If this USWNT in Tokyo is like a previous World Cup-winning team, it’s not the 2019 version, despite most of the players on the roster having won the trophy in France. No, this group may be much closer to the 2015 team, which started off with poor performances and was helped out by some luck and mistakes from opponents before finding their footing.

Carli Lloyd, who became the star of that 2015 side (but only after several ineffectual games) said on Saturday that this USWNT can still grow into this tournament.

“I still think we have a lot to give,” Lloyd said Saturday. “This is just the start. It was a good response, good result, good goals. We can always learn, we can always get better, but this is a start in the right direction.”

Luckily for the Americans, they won’t need to be leaps and bounds better by the next match, which is in just four days’ time. A draw against Australia to close the group stage will be enough to ensure the U.S. finishes second in Group G and secures a spot in the quarterfinal. But from there, where a challenge against either Brazil or the Netherlands awaits, better performances will be mandatory.