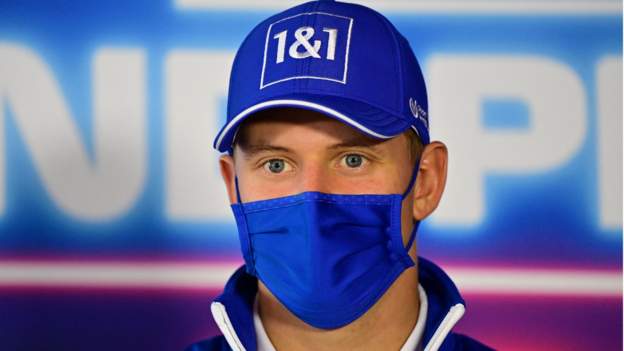 Hass Formula 1 driver Mick Schumacher says his father Michael is the best-ever driver in the sport, no matter what Lewis Hamilton achieves.

The Mercedes driver is battling with Red Bull’s Max Verstappen for this year’s title.

“My dad is the greatest driver there ever was,” said Schumacher, 22.

“But he is not only the best driver, he is also the best dad in the world.”

Schumacher senior, 52, was injured in a skiing accident in December 2013 and placed into a medically-induced coma after a severe brain injury.

His family have kept his condition private as they say those would be his wishes.

Earlier this week, his wife Corinna said her husband is “different, but he’s here” as he continues his rehabilitation.

However, they have given their backing to a new Netflix documentary which features close family members including Mick and his sister Gina-Maria, as well as current F1 drivers, with Sebastian Vettel among them.

Schumacher junior said in a BBC Radio 5 Live interview to be broadcast on Sunday: “I think he deserves every documentary that is made and if we can also share our experience it makes it more personal and credible.

“Everyone will get a better understanding for what he has done in Formula 1.”

His debut season at the top level is yet to yield a point but Schumacher junior says it has been a “steep learning curve”.

“I’m learning each weekend and progressing, and trying to open up my knowledge and see how I can use it,” he said.

“It is a dream come true. It is a job but also pure fun. I found my dream job and can live it day in and day out.

“I thought it would be super stressful but it is comfortable being here. I’m happy and can cope with the stress.”