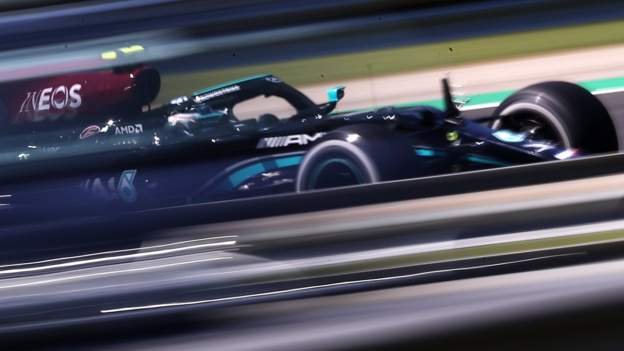 Valtteri Bottas led Lewis Hamilton in a Mercedes one-two ahead of Red Bull’s Max Verstappen in second practice at the Hungarian Grand Prix.

Bottas was 0.027 seconds quicker than Hamilton, with Verstappen 0.298secs slower than the Finn.

Verstappen was struggling with the balance of his car, complaining initially of lack of front grip and then too much.

It was a session perhaps even more inconclusive than normal in Friday practice as Verstappen, leading the championship by eight points, lagged behind the Mercedes.

He was off the pace of his rivals on both a single flying lap and on a long run when doing race preparation later in the session.

Verstappen complained over the radio after his single flying lap that the car was “so understeer-y it’s incredible”, only to go out for his race simulation run and say that “all the time I try to turn I’m losing the rear”.

He came in for an adjustment to his front wing but continued to lag behind the Mercedes for pace on the long run.

Mercedes, by contrast, had an apparently smooth day, topping both sessions and looking quick on both short and long runs.

Alpine impressed during the day – Fernando Alonso sixth fastest in the first session and Ocon then taking fourth quickest time in the afternoon.

Ferrari’s Carlos Sainz was fourth quickest in the morning session but the Italian team struggled in the second, the Spaniard 12th quickest, one position behind team-mate Charles Leclerc.

The second Alpha Tauri driver Yuki Tsunoda missed the vast majority of the session after crashing at the fast Turn Four in the morning, managing to get out for a brief run with less than five minutes to go.