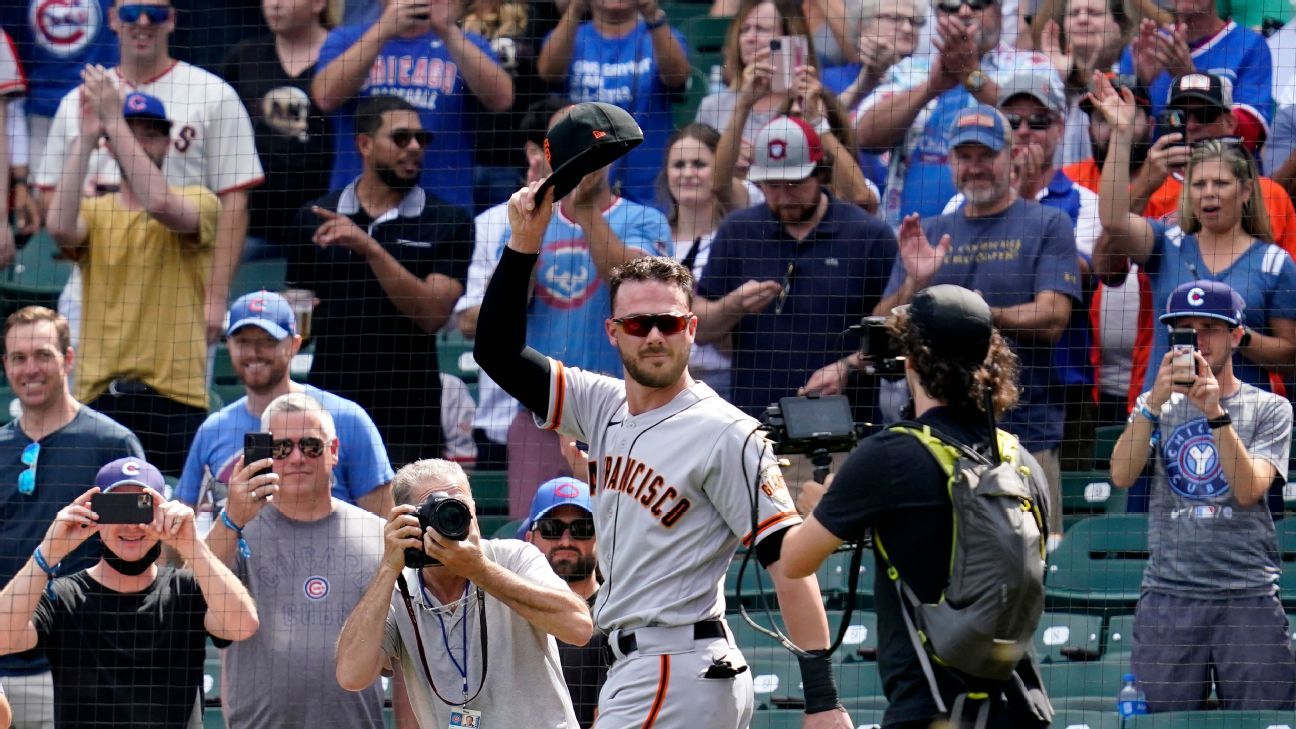 A video tribute, a No.17 tile from the scoreboard and two standing ovations were all part of Kris Bryant‘s day as he returned to Wrigley Field on Friday for the first time since being traded by the Chicago Cubs to the San Francisco Giants in July.

“I’ve never stepped foot on that (visitor’s) side of the concourse,” Bryant said with a laugh in the dugout before the game. “I was lost. I had no clue where I was going.”

Bryant, 29, seemed destined to be a career Cub after winning minor league player of the year, Rookie of the Year and league MVP in the span of three seasons from 2014 to 2016. A long-term contract never materialized, however, so he was traded to the Giants for prospects, just months before hitting free agency for the first time in his career.

“I had the thoughts, ‘Yeah, it would be super cool to be play for one team in my career,'” said Bryant, the second overall pick of the 2013 amateur draft. “Had those thoughts but not thinking when it will end. I never had those thoughts.

“I’ve made the choice to look back on my time here and smile at it. There were some harder times but if you were to tell me when I got drafted I would spend 6.5 years here and win a World Series and an MVP and Rookie of the Year and four all-star games and tons of great memories, I’d tell you, you were crazy.

“Now I’m sitting here today and actually that did happen to me.”

Bryant was visibly emotional during a pregame video tribute when he received his first standing ovation. Cubs’ owner Tom Ricketts was among those present for the ceremony. Team President Jed Hoyer and manager David Ross weren’t there as they’re isolating after testing positive for Covid last week.

“I’m not the best at soaking up big moments,” Bryant said. “But I hope I can find a way to really take it all in. Today I’m in left field. I’m super pumped for that. Its going to be nice running out there and listening to fans all game.”

Bryant received his second standing ovation when he came to the plate in the first inning with two on and two out facing former teammate Kyle Hendricks. He struck out on three pitches.

Bryant’s morning started with a large crowd waiting for him as the Giants bus pulled up to the visitor’s side of Wrigley Field. He likened it to fans waiting for the team when the Cubs returned home from Cleveland after winning the 2016 World Series in the early morning hours.

Bryant said he’ll try to take in the special moments each day of the three-game series and despite some ups and downs near the end of his Cubs career – he got off twitter for a while and his contract became a talking point – he has no hard feelings about his time in Chicago. Quite the opposite.

“Yeah you can be mad at how certain situations are handled but I got to put on the Cubs uniform basically whenever I wanted,” he said. “That’s so special. Not many people get to do that. And get paid lots of money to do it. I have tremendous amount of respect for every person in this organization and it will always be that way.”

Mostly, Bryant is grateful to have played on winning teams every year of his career; the Giants being no exception. He hasn’t closed the door on signing back with them or returning to the Cubs via free agency though the latter idea is a longshot.

The Cubs and Bryant haven’t had meaningful contract talks for several seasons. Now that other 29 teams will be able to bid on his services, returning to Chicago would be a shocking turn of events.

“I haven’t been answering trade questions (any more) but it’s a lot of other questions of the same nature,” Bryant said of his future. “I’m never closing the book on this place, ever.”

No matter what happens, Bryant’s time in Chicago will be a fond memory as he was part of a team which broke the longest championship drought in American sports history.

“To be part of winning teams from the moment I got here, it means a lot to me,” Bryant said. “All I’ve ever known playing for the Cubs is winning.

“This place is home to me. It always will be.”