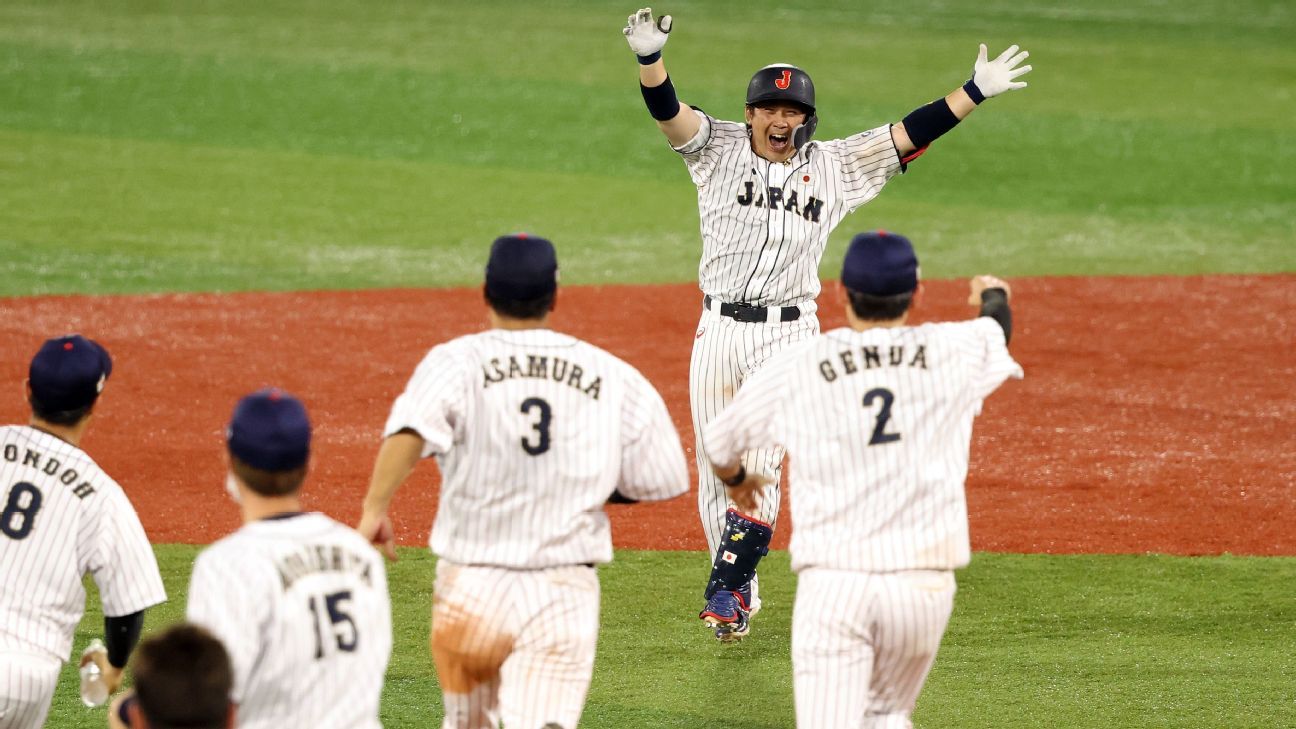 YOKOHAMA, Japan — Yuki Yanagita tied it with an RBI grounder off Scott McGough in the ninth inning, Takuya Kai hit a winning single against Edwin Jackson in the 10th and Japan beat the United States 7-6 Monday night to reach the Olympic baseball semifinals.

Japan overcame a 6-5, ninth-inning deficit against McGough, a 31-year-old former Miami Marlins reliever with 16 saves in his third season with the Central League’s Yakult Swallows. He walked Seiya Suzuki with one out as rain started to fall, then allowed a single to Hideto Asamura that put runners at the corners.

Yanagita hit a chopper to second, driving in a run on the groundout.

Under tournament rules, extra innings start with runners on first and second, an even more extreme distortion than the Major League Baseball runner-on-second rule used since the start of the 2020 pandemic season.

Ryoji Kuribayashi (1-0) retired the side in order in the top half, and Jackson (0-1), a 37-year-old veteran of a record 14 major league teams, relieved in the bottom of the inning.

Pinch hitter Ryoya Kurihara sacrificed, manager Mike Scioscia went to the mound and the U.S. went to a five-man infield.

Kai, who had entered as a defensive replacement, lined the next pitch off the right-field wall.

The U.S. (2-1) fell into the losers bracket of the double-elimination second round. To reach this weekend’s final, it must beat the winner of Tuesday’s elimination game between the Dominican Republic (1-2) and Israel (1-3), and then the Japan-South Korea loser.

Boston Red Sox prospect Triston Casas hit a tiebreaking, three-run homer in the fifth inning for a 6-3 lead after Todd Frazier started a comeback from a 2-0 deficit with an RBI double off former New York Yankees teammate Masahiro Tanaka.

Tanaka, who returned to Japan this season after seven years in New York, left in a three-run fourth after Mark Kolozsvary’s run-scoring single and a go-ahead single by No. 9 hitter Nick Allen.

Hayato Sakamoto, the 2019 Central League MVP for the Yomiuri Giants, tied it 3-3 in the bottom half against former St. Louis Cardinals pitcher Brandon Dickson with his second double, but the U.S. broke ahead in the fifth against right-hander Koyo Aoyagi.

Eddy Alvarez, the 2014 speedskating silver medalist turned baseball player, and Tyler Austin singled. That brought up Casas, a 21-year-old Double-A player and former first-round draft pick, whose go-ahead, two-run homer decided Saturday’s win over South Korea. He drove an outside 2-1 pitch to the opposite field for a 6-3 lead.

Baseball is being played at the home of the Central League’s Yokohama DeNA BayStars, and while most games have taken place in a nearly empty 34,000-seat stadium, there were perhaps 150 media and volunteers in the seats for the high-profile matchup.

Tanaka, naturally wearing pinstripes but with a J on his cap rather than an interlocking NY, gave up three runs and six hits in 3⅔ innings. He was pitching in the Olympics for the first time since 2008, when he threw seven scoreless innings as part of a staff that included Yu Darvish.

A two-time All-Star for the Yankees, the 32-year-old right-hander returned to Japan this season and is 4-5 with a 2.86 ERA for the Pacific League’s Tohoku Rakuten Golden Eagles.

With Scioscia and the U.S. bench barking at plate umpire Kwang Hoe Kang of South Korea, Casas walked with one out in the fourth and scored on Frazier’s two-hopper to the wall.

Eric Filia was grazed on the right elbow by the next pitch and Kolozsvary hit a tying single on the next. Jack Lopez pinch hit for Bubba Starling and struck out. Allen, the No. 9 hitter, drove an outside pitch down the right-field line for a double and a 3-2 lead.

Tanaka, head down, walked briskly to the dugout.

Japan went ahead in the third after Sakamoto doubled on a catchable ball that Starling failed to come up with as he crashed into the center-field wall, and 2020 Pacific League batting champion Masataka Yoshida and 2015 Pacific League MVP Yanagita had RBI singles around a pair of walks.

Dickson, a 36-year-old right-hander who has played in Japan and Triple-A since 2012, walked Munetaka Murakami leading off the fourth and Sakamoto tied the score 3-3 with an RBI double high off the 16-foot left-field wall for his third hit.

Former big league outfielder Hyun Soo Kim, who played for the Baltimore Orioles and Philadelphia Phillies in 2016-17, capped a seven-run fifth with a two-run homer off 34-year-old left-hander Jeremy Bleich, a Pittsburgh Pirates advance scouting assistant who retired as a professional player in 2019.

Kim hit his second double of the game with two outs in the seventh against 42-year-old right-hander Shlomo Lipetz, who will return to his day job at New York’s City Winery after the Olympics. Soo scored on Hye-seong Kim’s single, making this the first game of the tournament cut short under an Olympic rout rule.

Israel (1-3) plays an elimination game Tuesday against the Dominican Republic (1-2).

Ji-hwan Oh hit a two-run homer in the second as South Korea took a 3-0 lead. Baek-ho Kang had four of South Korea’s 18 hits.

After Danny Valencia’s bases-loaded walk cut the lead to 3-1 in the fifth, Sang-woo Cho (1-0) retired Ryan Lavarnway on an inning-ending humpback liner to the pitcher.

South Korea broke open the game in the bottom half against Chicago Cubs minor leaguer Alex Katz, who was charged with six runs — five earned — in one-third of an inning.