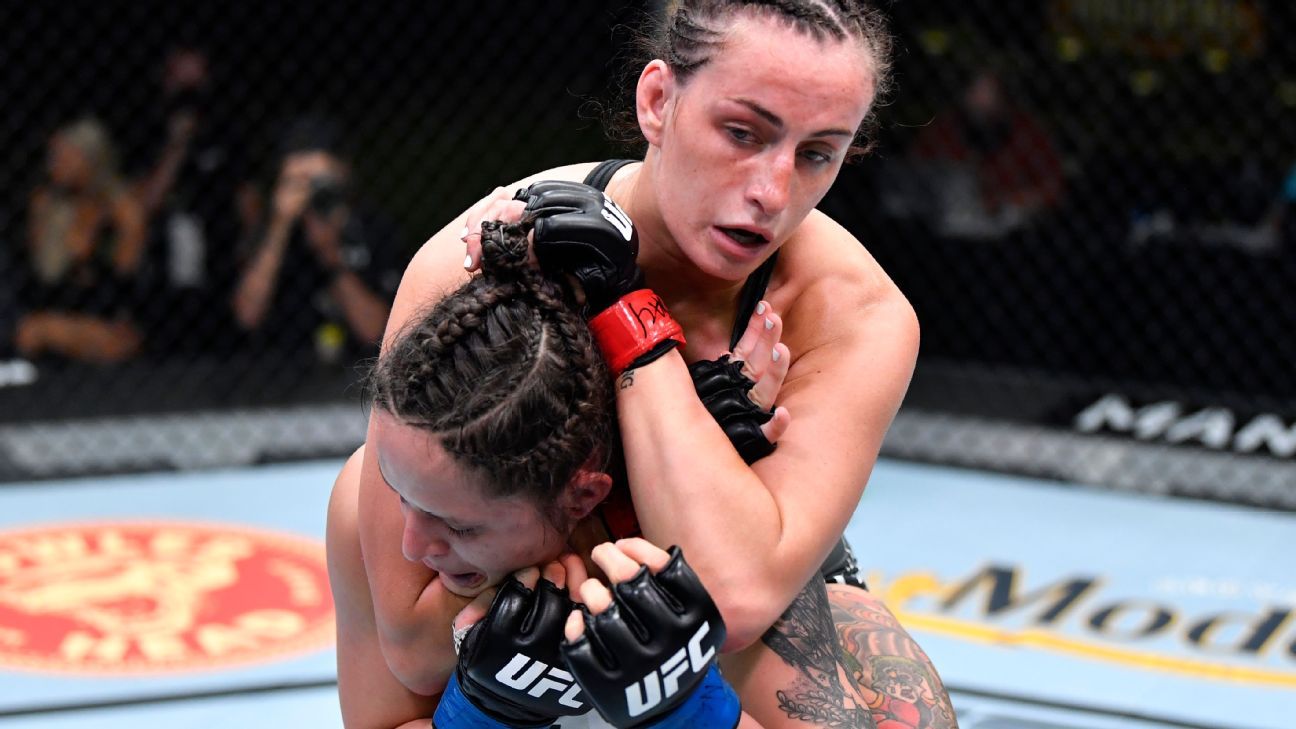 Casey O’Neill is starting to feel at home in the UFC.

Having won her first two fights in the promotion, and being locked in a third against former teammate Antonina Shevchenko on Oct. 2 at the UFC Apex, O’Neill (7-0) has delivered on the self-belief she had before moving to Las Vegas to further her MMA career.

Potentially more important, however, has been a culinary tour of Sin City, specifically the quest for the ultimate doughnut.

“I love doughnuts — they’re probably my favorite food or favorite sweet thing, so of course I get doughnuts after every fight,” O’Neill explained with a laugh. “I’ve found a couple [of stores], but it seems that every time I go to a new one, I like that place more than the last.

“I’ve currently got two favorites. One is Saint Honore, and then there’s a place called Paina Café, which does these mochi donuts, which are made from rice and are amazing.

“So clearly I’m thinking about them right now, but I’ll definitely be having some after my next fight.”

While O’Neill says she doesn’t have to watch her diet as closely at flyweight as she did fighting at strawweight, it’s clear that the doughnuts are very much a reward for taking care of business inside the Octagon.

Most recently, that came in a third-round stoppage of Lara Procopio, with the Scottish-born Australian securing a rear naked choke submission in June.

“It’s nice how the UFC is building me — I feel like they’re doing it the right way giving me harder fights as I go on,” O’Neill said, reflecting on that victory. “I’m still really young in my career, so obviously that fight was my hardest to date, but I feel like I handled the pressure and the fight really well and that I dominated the majority of it.

“I probably started a little slow in the first round and got to learn a few things, which I’m happy I got to go through as well and still come out with the finish.”

While she usually likes to get straight back into the gym on Monday after a fight, O’Neill said she took a week off after defeating Procopio to spend some time with her dad, who was visiting from Australia. They got out and explored Las Vegas and went hiking, which allowed O’Neill to get in a little covert training.

But it has very much been back to business since July, before the UFC offered up the bout with Shevchenko (9-3), which will be O’Neill’s third fight of 2021.

“They (the UFC) came to us a couple of times actually with some short-notice fights, but I’m not the only one who gets to make the decisions,” O’Neill said. “If it was up to me, I would literally fight every weekend, but my coaches have strongly advised to let them take control.

“We had a couple of nine-day-notice fights, [but] I would like to have a camp for each fight and go in there and really show my best. Because at the end of the day, nobody sees anything but your performance. That’s the only thing they judge upon, so I want to put myself in the best possible situation every time I go out.

“But when they called and offered this fight [against Shevchenko], I just thought it was a great fight for me; it was a really big name — she holds a lot of value even though she’s not ranked — and it looked like the perfect next step.”

Shevchenko might not carry the same star billing or record as little sister and UFC flyweight champion Valentina, but she does represent another step up from O’Neill’s first two opponents since joining the promotion.

The fight carries even greater significance given the two trained alongside each other at Tiger Muay Thai, suggesting both women will have an idea on what the other does and doesn’t do well.

“It’s going to be a good fight; I know that for a fact, because we’ve trained together before,” O’Neill said. “I think she’s got great striking, but in terms of being a fighter, this is my fight for the taking. I’m a dog when I get in there. I’m relentless. I’m able to push the pace on everybody and make them break, and I’ll be able to do that to her as well.

“I think that on the ground I’ll be able to dominate her there, and on the feet I’ll keep it too busy to let her plant and really be able to land anything.”

Getting the chance to have a proper strength and conditioning program — for the first time in her career — and access to proper rehab facilities and injury treatment have been huge for O’Neill since her move to Vegas.

It is all part of her UFC education, which improves with every fight.

“Obviously, this is what I’ve worked towards since I started MMA; anybody who says that the UFC wasn’t their end goal would be lying,” she told ESPN. “But once you get in there, it is a little daunting at first, you’re a little bit nervous; you make it out to be this big thing as it is the pinnacle of the sport, that’s what everybody looks at it as.

“But two fights in, I’m definitely feeling a lot more comfortable having got my feet wet. I really feel like I belong in there and am at the same level as these girls.”

A victory over Shevchenko could open up the possibility of a fourth fight for 2021, though O’Neill admits she’ll have to wait to see what happens, adding that while she would like to be a “female Kevin Holland,” there is her record and longer-term career to think about.

As for a fight with the other Shevchenko down the road and potentially for the title?

“I’ll get there one day. This is another step on the journey. Like I said, that is my end goal.”

Imagine the doughnut feast if she does.