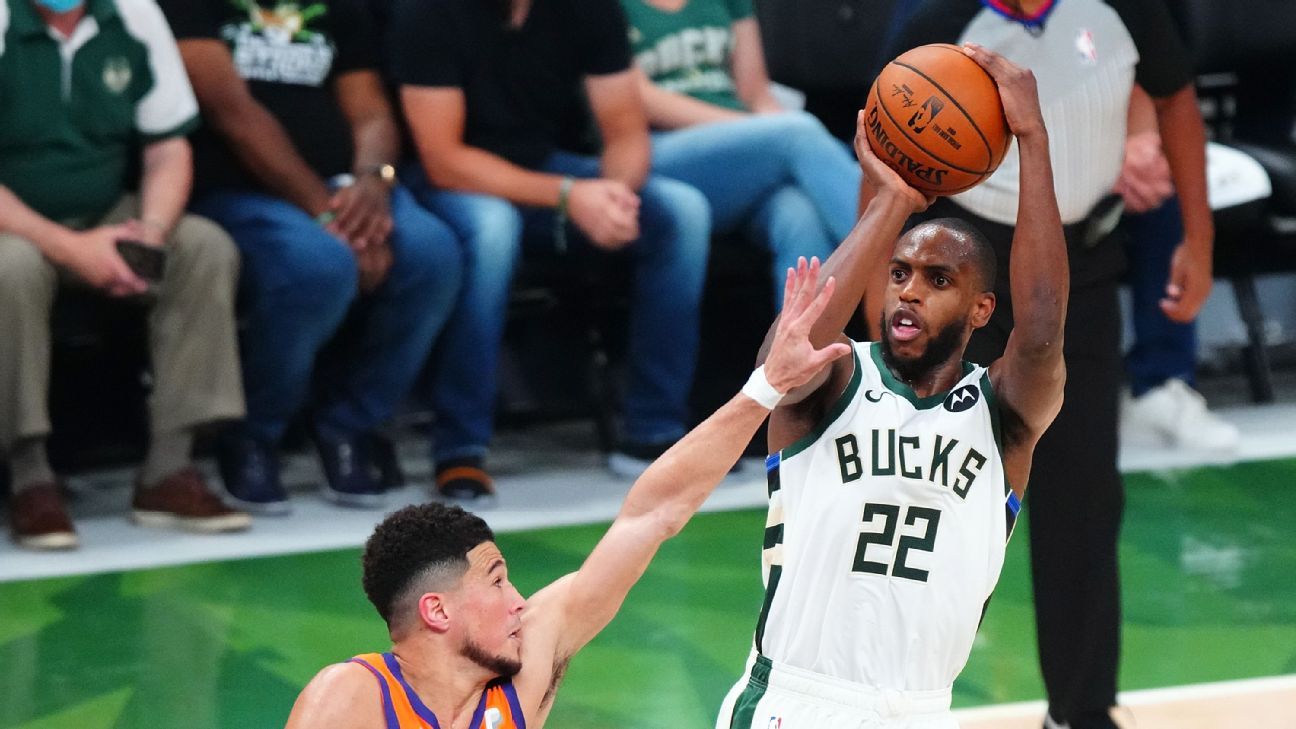 MILWAUKEE — When are we going to see a Khris Middleton game?

From the Deer District to the bluffs of Lake Michigan, this has been the persistent question around town since the Bucks returned to Milwaukee down 2-0 to the Phoenix Suns in the 2021 NBA Finals. Giannis Antetokounmpo will get his in the paint, and the defense can be relied upon to make life difficult for the Suns’ half-court offense.

But however much the Milwaukee Bucks may cover ground defensively, or protect the rim, or get a spirited lift from a P.J. Tucker, a Bobby Portis or a Pat Connaughton, the margin of success for the Bucks in recent seasons has often been Middleton. The Bucks have a two-time MVP in Antetokounmpo, but in a tractor pull like the one that took place at Fiserv Forum in Game 4, Middleton’s shotmaking in the half-court is essential to the Bucks’ formula and identity.

Middleton didn’t turn in his most efficient performance on Wednesday night, but it was the most illustrious of his career — A Middleton Game, indeed. He scored 40 points, including 14 in the fourth quarter, and 10 in the final 2:07 of the Bucks’ 109-103 comeback win to square the series at 2-2.

“Khris has no fear and he never has,” Bucks point guard Jrue Holiday said. “Being one of the guys who has guarded him in my career, knowing what he’s done, hitting big shots, making big plays, he’s never been afraid of the moment. So putting him in this situation is kind of perfect.”

The division of labor in Milwaukee between the Bucks’ two most prolific players doesn’t exactly conform to the league’s traditional hierarchical pecking order. Antetokounmpo is a new-school unicorn whose athleticism fuels virtually everything the Bucks do offensively and defensively. In contrast, Middleton brings a game that’s practically retrograde in the modern NBA. He thrives in the mid-range and manufactures opportunities out of nothing with his rhythm dribble.

Middleton’s ability to create against a set defense when the gears grind in the closing minutes of crucial games means that it’s him, rather than Antetokounmpo, whose hands are often on the controls. That was the case in Game 4, a rugged affair in which only Phoenix guard Devin Booker among the game’s featured stars could establish any offensive flow. The Bucks failed to find consistent opportunities for Antetokounmpo to attack, while Holiday struggled with his shot both from distance and at the rim. Middleton attempted a heavy volume of shots during the first three quarters, but never shot better than 50% from the field at any point on the night.

A tense fourth quarter for the Bucks begged for Middleton’s shot creation. After a foul by Tucker on a 3-point attempt by Jae Crowder that yielded three free throws and a 5-point lead for Phoenix with just over six minutes to go, Middleton harnessed that creativity and assumed the closer’s role for the Bucks. Time and again, he scooped up handoffs from Antetokounmpo and either found his way to the basket, or a layer of space to launch one of his patented fadeaway jumpers.

“That’s what he does down the stretch,” Antetokounmpo said. “We want him to have the ball. We want him to be the decision maker. We know he’s going to take big shots, and tonight he was incredible.”

ABC is your home for the 2021 NBA Finals, where the Phoenix Suns and Milwaukee Bucks are tied 2-2.

In the game’s final 30 seconds, Middleton ultimately sealed the win for the Bucks with a strong finish against Booker on the break, then notched points 37 through 40 on two pairs of free throws as the Bucks tied the series.

“Late in the fourth quarter, we just ran sets that allowed me to get to my spots,” Middleton said. “After that, I just got to make reads — whether to shoot, whether to find an open guy, Giannis on a roll. It’s just reading the defense at that point. Just luckily, thankfully, I hit some shots.”

A second-round draft pick who was effectively a throw-in to Milwaukee in a deal for Brandon Knight in 2013 after a forgettable rookie season with the Detroit Pistons, Middleton has maintained a humility that belies his competitiveness. As the Bucks have grown from a 15-win team during his first season in Milwaukee to a contender, he has quietly assembled a reel of signature shots and clutch performances, the most storied of which was Wednesday night.

Dominant as Middleton was in the latter half of the fourth quarter, the night’s most dramatic play belonged to Antetokounmpo. With the Bucks clinging to a 101-99 lead and Antetokounmpo in front of him at the elbow, Booker floated an exquisite lob to Suns center Deandre Ayton that appeared destined for a game-tying alley-oop. In an act of body control that can’t be explained, Antetokounmpo spun around, then met Ayton at the rim for what will be recorded as one of the most celebrated blocks in NBA Finals history, one that even Antetokounmpo struggled to describe.

“I thought I was going to get dunked on, to be honest with you,” Antetokounmpo said. “I felt [Ayton] rolling to the rim behind me, so I knew the only chance to get a stop was to just jump toward the rim and try to cover that angle for him to score.”

Middleton called the play an “Oh s— moment” in which a potentially fatal defensive error transformed into a stroke of history by the good grace of a living NBA legend. It’s somewhat fitting that even amid his 40-point output, Middleton’s enormous contributions in Game 4 will be chronicled with a little less shine.

The series now returns to Phoenix, where the Bucks will need to win at least one game — preferably for them, Game 5 on Saturday (9 p.m. ET on ABC).

“Whatever we’re doing here,” Middleton said. “We’ve got to find a way to do it there.”