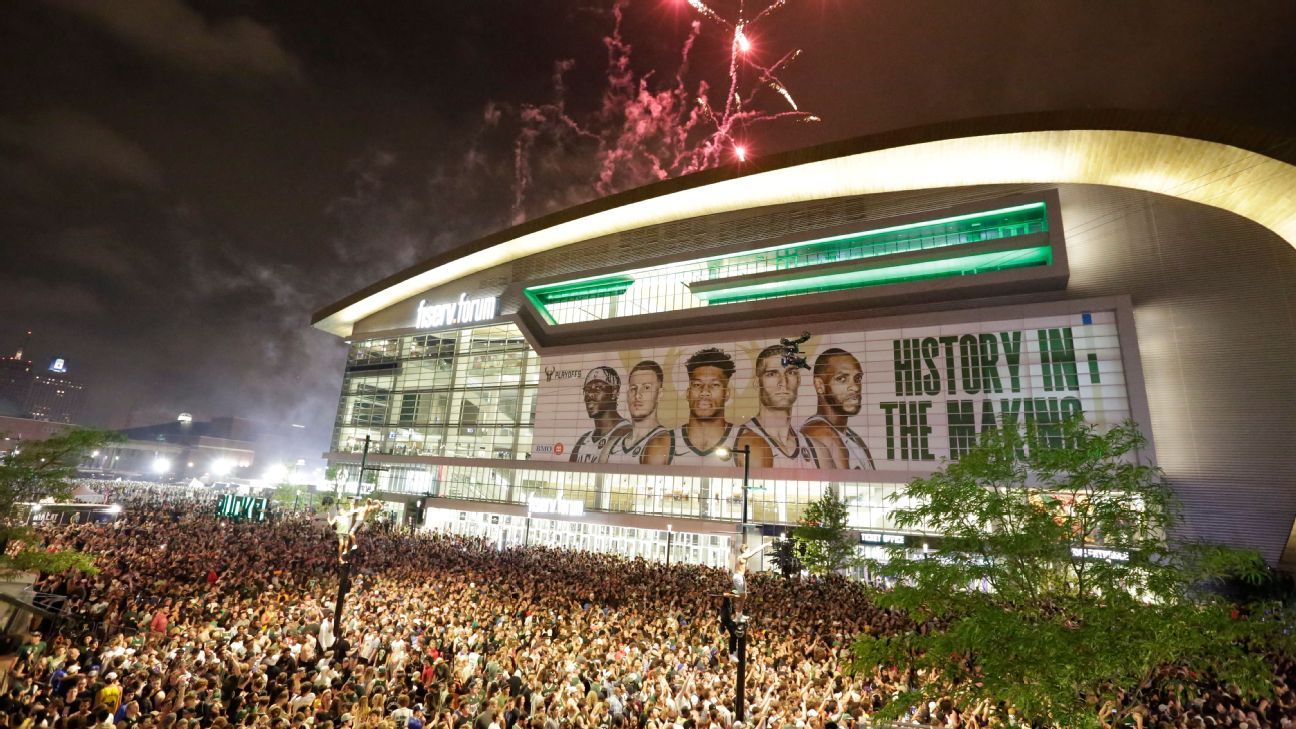 The shootings both happened at about 12:42 a.m. at two locations near Water Street, police said in a statement. TV station WISN had a reporter broadcasting from the scene when multiple shots were heard, prompting people to flee.

The shootings were across the Milwaukee River from Fiserv Forum, where the game was played, and the Deer District plaza, where a crowd of roughly 65,000 had gathered for an outdoor watch party. The area where the shootings took place is on a street heavily populated with bars and restaurants.

During Tuesday night’s game, a police officer was trampled by people trying to get into the Deer District watch party after the area had reached capacity, Milwaukee police Capt. Jesús Ortiz said in an email. The officer didn’t sustain any major injuries but reported being in general pain, Ortiz said.

Following one of the shootings, a 22-year-old man had non-life-threatening injuries, police said, and a suspect was in custody.

In the other shooting, which police said happened simultaneously, a 19-year-old woman and a 32-year-old man had non-life-threatening injuries. One person was in custody and other suspects were being sought, police said.

The two shootings, which were in the immediate area of the celebrations, likely were what was heard during the TV coverage, Ortiz said.

The celebrations came after Giannis Antetokounmpo capped one of the greatest NBA Finals ever with 50 points as Milwaukee beat the Phoenix Suns 105-98 to win the series 4-2.

Fans who packed the streets surrounding the arena had cheered and danced all night as they watched the game on giant video screens, and the massive crowd erupted in jubilation as the game ended. A few fans climbed light poles in the plaza and others jumped off a bridge into the nearby river as fireworks exploded above the arena.

Joy Smith, 50, of Milwaukee, danced after the final buzzer. “Milwaukee is underrated, but we proved to the world we could do it,” she told the Milwaukee Journal Sentinel.

Another fan, Sabrina Holland, 37, of Milwaukee, called it “epic.” She said: “Everyone who’s anyone is here.”

Before the game, and at the city’s request, Gov. Tony Evers mobilized 150 National Guard members to help in Milwaukee with traffic control and public safety.