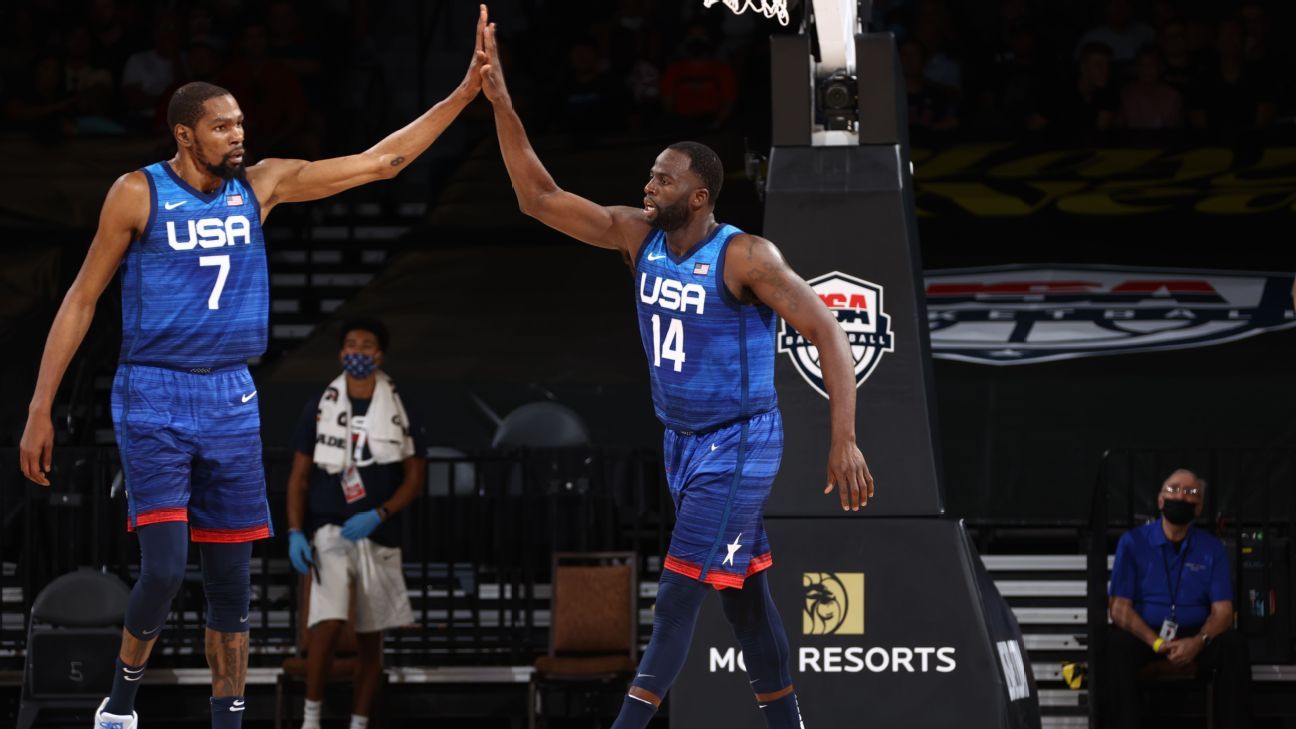 LAS VEGAS — Team USA stabilized itself by putting together its most complete game of its Olympic preparation schedule, beating Argentina 108-80 Tuesday night.

After back-to-back losses that saw the Americans struggle with offensive execution and defensive stamina, they showed more traction on both fronts 12 days before their Olympic opener in Tokyo.

Kevin Durant, the unquestioned engine of the national team’s offense, had shown some rust after taking some time off following the Brooklyn Nets‘ seven-game series loss last month in the Eastern Conference semifinals. Like many of his Team USA teammates, he looked a little flat in the first two exhibitions, which both ended in unexpected defeat. He was just 10-of-26 shooting in those defeats to Nigeria and Australia.

Durant came out with a purpose Tuesday, swishing a 3-pointer on the game’s first possession. He scored eight points in the first quarter and ended with 17 points on a more Durant-like 6-of-9 shooting.

It was a similar story for Bradley Beal, who shot just 38% and averaged just seven points in the first two games while trying to regain rhythm. Beal made his first four shots, two of them 3-pointers, and ended with 17 points for easily his best game of the pre-Olympic exhibitions.

Despite it being the second game of a back-to-back and a comfortable win, coach Gregg Popovich played Beal 30 of the game’s 40 minutes in an attempt to help round him into form.

Popovich cited conditioning as a reason the Americans faded down the stretch in the two losses. After a heavy schedule for most of the players over the previous 12 months, players taking time to rest was expected after their seasons ended but it seems to have contributed to the slow start.

It was also a strong performance from Zach LaVine, a late addition to Team USA who has been building a case for more playing time this week. LaVine was in Popovich’s starting lineup for the Jayson Tatum, who sat out to rest a sore knee, and made a statement with 15 points, five rebounds and three assists.

LaVine, who has had more time off as the Chicago Bulls missed the playoffs, is one of the players who appears to have come in better rhythm. He had a spectacular highlight dunk in the fourth quarter, rising over a defender and slamming it despite a foul.

It must be said the Argentineans, who came in ranked No. 4 in the world after taking the silver at the 2019 World Cup, were the weakest team the Americans have yet faced. They are 0-3 in the games at Mandalay Bay this week and are an older team with limited athleticism. Former NBA player Luis Scola, who is 41, led them with 16 points.

A better test for Team USA’s development will come Friday when they get a rematch with the Aussies. It will come after two days off to allow for some practice and film work.