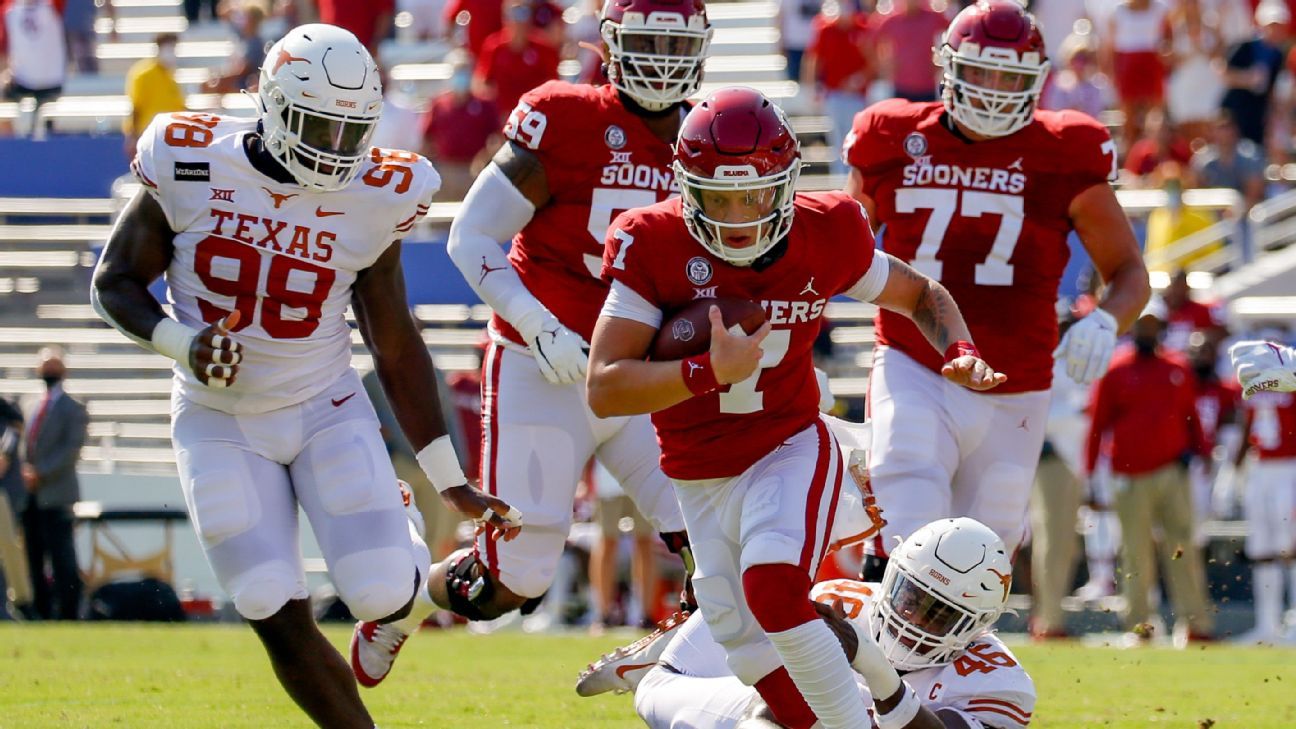 Texas and Oklahoma officially made their first move toward leaving the Big 12 on Monday, when the flagship programs notified the rest of the conference they do not intend to extend their grant of rights media agreement, which runs through June 30, 2025.

High-ranking decision-makers throughout the country expect the move to result in a seismic shift of the power structure and organization of college athletics, but two big questions still remain: how and when.

ESPN reporters Jeff Borzello, Heather Dinich, David M. Hale, Adam Rittenberg and Mark Schlabach take a look at where things stand and what the domino effect of OU and Texas leaving the Big 12 would mean.

What we know so far

The joint statement from Oklahoma and Texas on Monday was the first step for the Sooners and Longhorns in seeking membership in the SEC. Next, the two schools would need to formally petition the SEC for membership. For that move to happen, 11 of the 14 current SEC presidents and chancellors would have to agree to invite them.

Although Texas A&M initially criticized the potential move, it’s believed enough SEC schools will vote to add the two new members. The date of that vote isn’t immediately known. The other question: Would the SEC presidents still be willing to extend an invitation now if Oklahoma and Texas decide to stick around in the Big 12 through the 2025 agreement?

OK, Texas and Oklahoma submitted the letter. Now what?

The two most likely scenarios: Texas and OU either stick around through June 2025, or they could bolt for the SEC as early as 2022 and each pay a penalty of at least $75 million-$80 million. One source speculated that if the schools decide to stick around and the relationship sours to a point of deterioration within the rest of the conference, they could get to an even larger settlement. If the Big 12 dissolves before the grant of rights contract expires, there is also the possibility Oklahoma and Texas would no longer be bound by it.

Why are Texas and Oklahoma deciding to do this now?

Sources told ESPN there are myriad reasons for the unexpected decision, including dwindling home attendance for Big 12 games, recruiting, recent federal court rulings regarding amateurism and name, image and likeness, and, of course, money.

According to federal tax records, the 10-team Big 12 distributed about $409 million to its members in fiscal year 2020, or about $37 million to $40.5 million per school. That was a slight decrease from the $38.8 million the league distributed from fiscal 2018; the drop was caused by the pandemic.

Meanwhile, the 14-team SEC generated about $768.9 million and distributed $45.5 million to each school in 2020. That number would likely increase with the addition of Oklahoma and Texas, which would allow the SEC to go back to the negotiating table with ESPN. In December, ESPN and the SEC announced a new 10-year deal that begins in 2024, which makes the network the exclusive rights holder for SEC football and men’s basketball.

According to sources within the Big 12, one of the first warning signs for Oklahoma and Texas came in May, when a media consulting firm indicated the league probably wouldn’t be in position to greatly enhance its media rights deals with ESPN and Fox once they expire. Texas Tech president Lawrence Schovanec told the Lubbock Avalanche-Journal in May that those networks declined to open early negotiations on a new deal because of the changing landscape of college sports and how consumers watch sports.

“The general result is that, at this time, with so much uncertainty in the media marketplace as well as the landscape for collegiate athletics, our partners, ESPN and Fox, are not interested in acting preemptively with regard to our contract,” Schovanec told the Avalanche-Journal. “They recognize the importance of our partnership, but there’s just too much uncertainty, and they do have four years to go. So we’ll wait until we get to the right place and time.”

One source within the league said he had heard rumblings about the possibility of Texas wanting to leave, but added “nobody saw this coming.”

What happens to the remaining Big 12 programs?

Unfortunately, the future doesn’t look too rosy for any of them. Industry sources indicated to ESPN on Sunday the SEC’s potential additions of Oklahoma and Texas might be the first step in the formation of a single superconference, which would one day include as many as 60 teams or as few as 32. Under that scenario, powerhouse teams from the ACC, Big Ten, Pac-12 and SEC and Notre Dame would fold into one single entity. Those schools would play each other and no one else.

The other FBS teams, including some of the teams from the aforementioned leagues and those from the AAC, Conference USA, MAC, Mountain West and SunBelt, would essentially drop to a lower division. Other scenarios include the formation of three or four superconferences, or some sort of alliance between the ACC, Big Ten and Pac-12 to offset the SEC’s growing strength.

Until then, the remaining Big 12 teams have to decide whether to try to keep the league intact and replace Oklahoma and Texas, or even try to expand. Might Iowa State find a home in the Big Ten? The league already controls that market with Iowa. Could Texas Tech find a home in the Pac-12? Would Kansas, despite its football futility, be attractive to the ACC because of its basketball tradition? West Virginia already has its eyes on that league. And what about Oklahoma State? Baylor, Kansas State and TCU might be in even more difficult circumstances if the Big 12 folds.

In the past, a predictable outcome would have been for the remaining Big 12 teams to poach some of the best teams from the American — Cincinnati, Memphis, Houston, SMU, UCF and South Florida. But the Big 12’s standing has been weakened so much, it might end up being the other way around.

How will this affect expansion of the College Football Playoff?

It is yet to be seen, but if OU and Texas join the SEC, it’s not unreasonable to think the SEC could get seven teams in a proposed 12-team field, including both of their newest members, even if they were to finish 10-2 or 9-3. That potential scenario could diminish support for the 12-team proposal during a summer that is being used to solicit coast-to-coast feedback on expansion from university presidents, athletic directors, coaches, conference commissioners and players.

One source involved in the discussions said they didn’t think the OU-Texas news would impact the timing of a decision on whether to move forward with accepting the 12-team format. The CFP management committee, which includes the 10 FBS commissioners and Notre Dame athletic director Jack Swarbrick, are expected to meet in late September with the 11 FBS presidents and chancellors who control the playoff to discuss the findings of their feasibility study.

CFP executive director Bill Hancock was not immediately available for comment when contacted by ESPN on Monday.

Will this add more pressure on Notre Dame to join a conference?

Notre Dame has three key priorities in remaining independent. The first is access to the playoff, which a 12-team model would provide. The second is a home for its Olympic sports, which the ACC gives them through at least 2036. The third is a broadcast partner, which NBC continues to be. In other words, even with realignment, there’s little incentive for Notre Dame to make a move.

Of course, things could change. Would the money being offered by a new Big Ten TV deal be enough of a lure? What if the 12-team playoff doesn’t pass and, instead, access for conference champs is prioritized? Does the ACC signal that, short of adding Notre Dame, the league could collapse? All of those things are possible, but not likely at this point.

It’s also worth remembering the Irish are contractually tied to the ACC through 2036 as part of their grant of rights deal with the league for non-football sports. The agreement says if the Irish join any conference before then, it must be the ACC.

Without question, the Big Ten, Pac-12 and ACC are going to pitch Notre Dame on affiliation, but as Swarbrick said earlier this summer, “We’re more committed to independence than ever.”

Swarbrick told ESPN this weekend, “I like our position a lot, but I also realize that the overall situation remains very fluid.”

What’s next for conferences such as the Big Ten and Pac-12?

The Big Ten is on firm financial footing and doesn’t necessarily need to add simply for the sake of numbers. But there’s increasing interest among some Big Ten administrators about whether the league should be aggressive in seeking new members. The Big Ten’s TV deal expires in 2023.

Sources said the Big Ten likely would only consider schools that are members of the Association of American Universities, a group of top research institutions that matters a lot to Big Ten presidents. Every Big Ten school but Nebraska has AAU membership, and Nebraska was in the AAU when the Big Ten pursued the school in 2010. Texas is an AAU member but Oklahoma is not. Other than Texas, Iowa State and Kansas are the only other Big 12 schools part of the AAU. There’s strong AAU membership in both the Pac-12 (Arizona, Cal, Colorado, Oregon, USC, UCLA, Washington) and the ACC (Duke, Georgia Tech, North Carolina, Pitt, Virginia). Notre Dame is not an AAU member, but the Irish are the conference’s clear exception to its AAU preferences.

What happens to non-football teams within these programs?

These moves — and the ones that will undoubtedly follow in the next weeks, months and years — are driven almost entirely by football, with basketball and other non-football sports taking a back seat in discussions. For the most part, basketball coaches were in the dark about Texas and Oklahoma’s departure discussions, with multiple basketball coaches in the Big 12 and SEC telling ESPN they found out via social media when everyone else did.

If and when Texas and Oklahoma move to the SEC, the non-football teams will likely follow; but if this is the first step to superconferences outside of the NCAA’s purview, it’s unlikely non-football sports would go that far. It’s worth noting the CFP controls the college football postseason, while the NCAA still runs and operates the men’s and women’s basketball tournaments, along with every other postseason competition.

The biggest school worth watching from a men’s basketball perspective is Kansas, one of the true blue bloods in the sport. There hasn’t been another time when one of the handful of historically elite programs was essentially a free agent, which would be the case if the Big 12 ultimately dissolved. Baylor, which won last season’s national championship, is also in peril if the Big 12 collapses.

The Big 12 has been arguably the best conference in men’s basketball since it became a 10-team league after the last phase of realignment. From a resource perspective, the remaining schools — particularly ones with successful football programs — are obviously at risk of falling behind.

One other sport to monitor is softball. The SEC, as a softball conference, was already world-class — it has had at least 12 teams reach the NCAA tournament for four straight years and held seven of the top 14 seeds in 2021. Adding Oklahoma and Texas to the mix makes that nine of last year’s top 14 and, in the Sooners, gives the league the most dominant softball program in the nation.

What does this mean for the future of the NCAA?

After a tumultuous 17 months, the NCAA is inching closer to a breaking point. While numerous administrators around the country express sheer confusion about the future of realignment, there seems to be one thing they all agree upon: This is the first step toward a breakaway from the NCAA for the power programs.

As one Power 5 athletic director told ESPN this past week, “The NCAA has essentially collapsed, and it just hasn’t been recognized yet.”