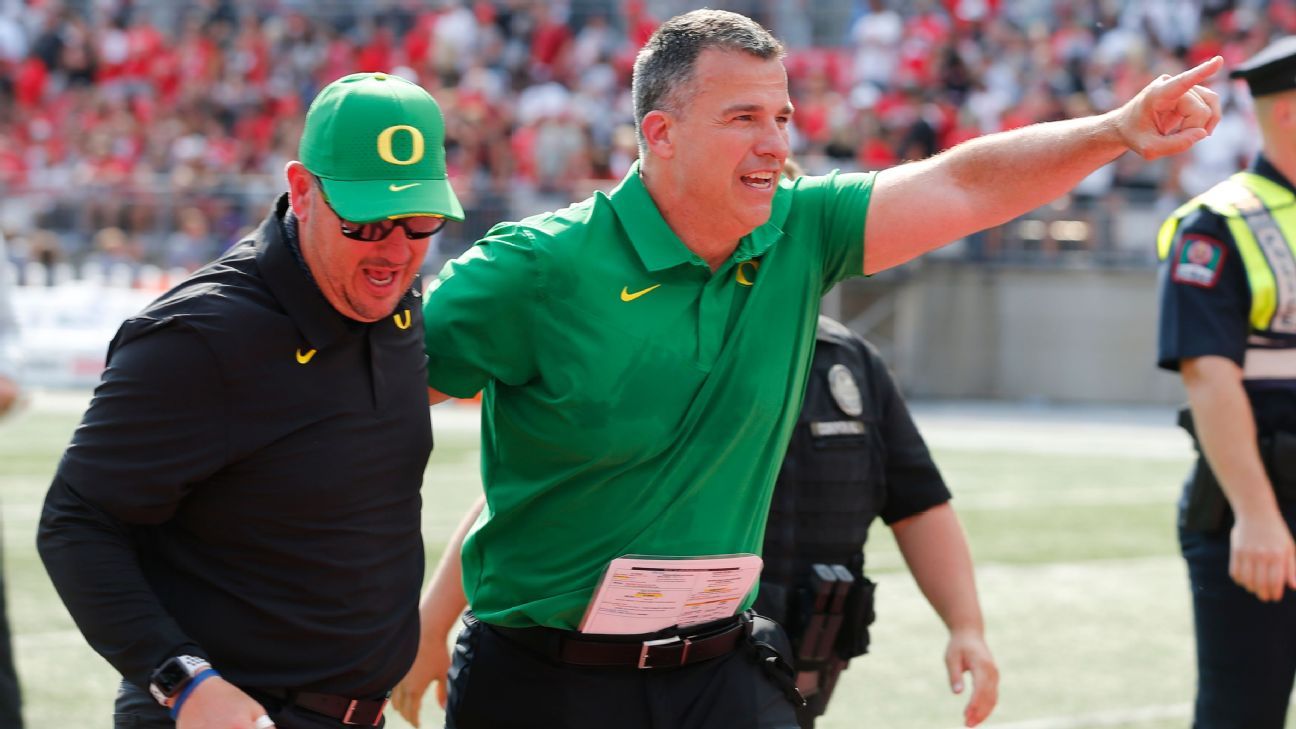 Oregon and Iowa were the big movers in The Associated Press college football poll after road wins over top-10 opponents.

The Ducks’ victory over Ohio State earned them a promotion from No. 12 to No. 4.

Another impressive defensive performance by Iowa in the Cy-Hawk Trophy game pushed the Hawkeyes from No. 10 to No. 5.

Arkansas, coming off a home win over old Southwest Conference rival Texas, was rewarded with its first appearance in the AP Top 25 in five years, coming in at No. 20.

Alabama remained No. 1 in the AP Top 25, which is presented by Regions Bank. The Crimson Tide received 60 of the 63 first-place votes. Georgia, which picked up the other three first-place votes, stayed at No. 2.

Oregon’s eight-rung leap came after its 35-28 win in the Horseshoe. It marks the biggest jump for a team entering the top five since LSU went from No. 13 to No. 5 after it knocked off second-ranked Georgia in October 2018.

The Ducks have their highest ranking since they finished the 2014 season No. 2 as the national runner-up to Ohio State.

Iowa, a 27-17 winner at Iowa State, allowed a total of 23 points while beating two ranked teams in succession for the first time since 1960. The Hawkeyes’ defense is always stout. The question about this team is whether it can elevate its offensive play with quarterback Spencer Petras.

The Big Ten has five ranked teams and matches the Southeastern Conference with three in the top 10, thanks to Penn State’s move up from No. 11.

More could come in over the next couple of weeks.

Mel Tucker’s much-improved Michigan State team is 2-0 entering its road game against No. 24 Miami this week. Indiana, which fell flat in its opener against Iowa, gets a chance to show it wasn’t a one-year wonder in 2020 when it hosts No. 8 Cincinnati. Maryland likely will be 4-0 going into its Oct. 1 home game against Iowa.

• No. 20 Arkansas gets a third straight home game, this one against Georgia Southern, before things get real in SEC play.

• No. 23 BYU, which appeared in every regular-season poll last season, returns after beating Utah for the first time in 10 meetings. Voters are buying in after taking a wait-and-see stance with a team that lost the No. 2 overall draft pick (QB Zach Wilson) and eight defensive starters.

• Two solid wins to start the season, the latest against a surprisingly weak Washington, bring No. 25 Michigan back into the rankings. The Wolverines don’t hit the road until Oct. 2.

• Southern California dropped out after a 42-28 loss to Stanford, which scored its most points against the Trojans in 10 years.

• Texas won’t have buyer’s remorse about its looming entry to the SEC, but new coach Steve Sarkisian’s 40-21 loss to an Arkansas team picked second-to-last in the West surely had Longhorns fans gnashing their teeth.

• Utah’s two-week stay in the rankings is over. Its offense has converted just 4 of 17 third downs in two games.

The SEC has seven teams in the AP Top 25 for the first time since October 2020.

No. 1 Alabama at No. 11 Florida. Crimson Tide have won seven straight against the Gators.

No. 22 Auburn at No. 10 Penn State. The teams split two bowl matchups, but this is the first regular-season meeting.