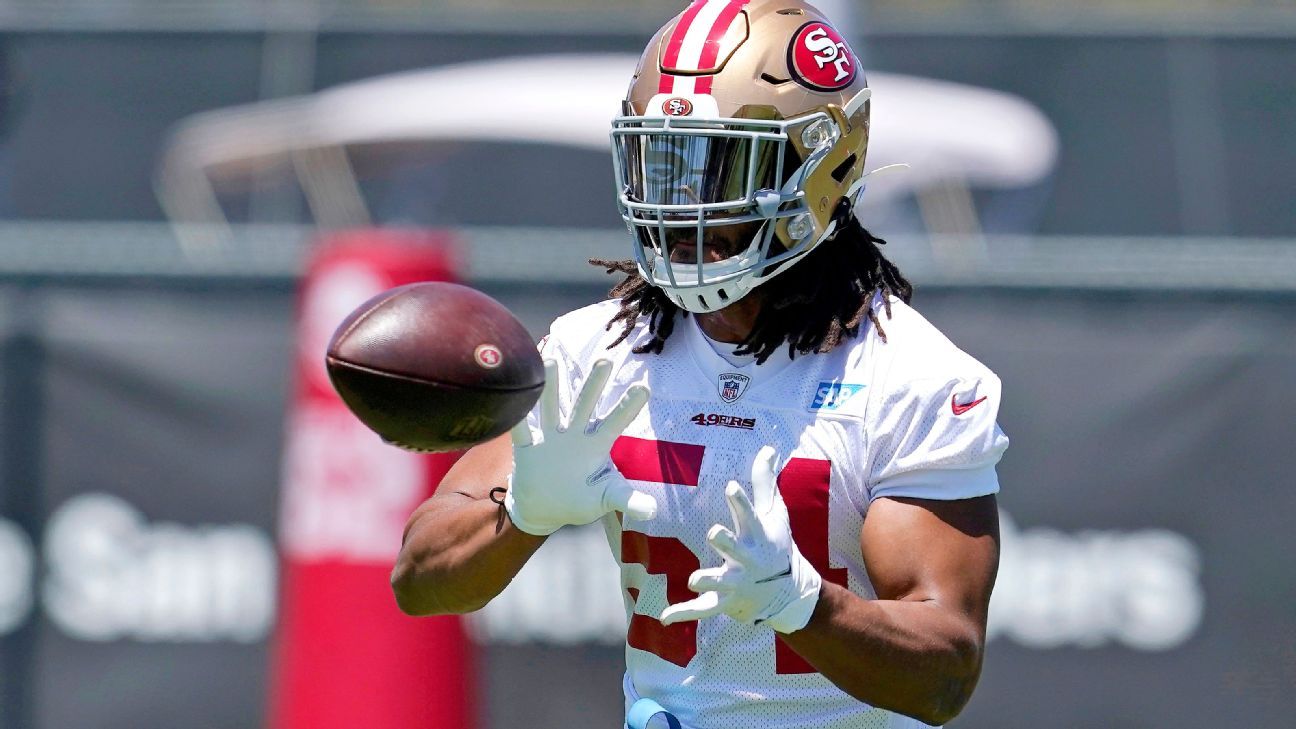 SANTA CLARA, Calif. — In a span of 341 days, the San Francisco 49ers rewarded three players — tight end George Kittle, left tackle Trent Williams and, most recently, middle linebacker Fred Warner — with contracts at the top of the market for their respective positions.

The number climbs to four if you want to separate fullbacks from running backs and include Kyle Juszczyk. As roster-building complications go, it’s a challenge the Niners were happy to take on.

“It’s not a problem, but it’s a good situation to have where you have guys that are at the top of market,” general manager John Lynch said. “Obviously, everyone in that locker room can’t be that, but we’re proud and happy that we’ve been able to do that. And I think we’re still in a good place from a cap situation and feel good about that.”

Indeed, nobody can blame the 49ers for paying the likes of Warner, Williams and Kittle. All three are the type of foundational players who not only produce on the field but check all the necessary boxes in terms of leadership and work ethic.

But while it’s common for teams to reward their best players with big contracts, the 49ers have found themselves building the top of the roster in more unusual ways from a positional value standpoint.

Sure, Williams plays one of the game’s most important positions at left tackle but Kittle and Warner don’t, at least according to what the market has said for many years. Kittle ($15 million annual average) and Warner ($19 million) set new standards at positions where forward movement contractually has been hard to come by.

Those steps forward were a welcome sight for other tight ends and likely will be soon for off-ball linebackers, but paying big bucks at those positions almost certainly means not being able to pay others.

A popular belief among some former NFL personnel executives is ideally a team’s five highest-paid players should be the quarterback, outside pass-rusher, left tackle and cornerback with one wild-card spot.

The Niners under Lynch and coach Kyle Shanahan buy into that philosophy, but only in part.

“That’s the hardest thing that everyone looks into because it’s not black and white,” Shanahan said. “It’s not who do you value the most? What position do you value the most? I mean, I think everyone’s paying a quarterback and a pass-rusher one and two for the most part. What if you don’t have that quarterback, what if you don’t have that pass-rusher, or what if you have a great receiver or whatever it is, what’s your team. And each team is different and teams have won a lot of different ways.”

Since Shanahan and Lynch took over in 2017, there hasn’t been much guesswork needed to see their vision. They’ve poured significant resources into building the defensive line and have put plenty into quarterback, paying Jimmy Garoppolo a top of market deal in 2018 and trading three first-round picks and a third-round selection to move up for Trey Lance in March.

From there, though, the Niners’ primary team-building focus has been on finding and developing the best players who also fit the mold of what they’re looking for in terms of character. Warner and Kittle are former third and fifth-round picks, respectively, who have willed their way to the top of their positions.

The NFL season is just around the corner. Here are the biggest questions heading into training camp and roster projections for all 32 teams. Read more »
&#8226 Full 2021 schedule | Depth charts »
&#8226 Transactions | Injuries | More NFL »

When Buckner needed a contract, the 49ers faced the possibility of losing defensive lineman Arik Armstead and safety Jimmie Ward. The opportunity to keep both and trade for a pick that turned into a younger, cheaper replacement like Javon Kinlaw only buoyed their belief that for as hard as trading Buckner was, the accumulation of other losses would have been more difficult to overcome.

“That was tough because it was very similar to Fred,” Shanahan said. “A guy who has done everything right … then you’ve got to make a decision that makes you kind of sick because of someone like Buck. Would have been the same thing with someone like Fred or someone like Kittle, guys are at the top of their position, who do everything the right way. Fortunately, what it took to get them and compare it with what it meant to our team, who we would lose, how to replace it. And it was a lot easier to get done and that’s why it worked out.”

With no other foundational players who must be signed to long-term deals before the salary cap is set to take off in 2023, the Niners have put themselves in position to have needed flexibility by having Lance as the starting quarterback and Nick Bosa as their top edge rusher on rookie contracts for at least the next couple of years.

Those are the types of tradeoffs and big-picture thinking the Niners hope will allow them to reach their goal of building sustainable success.

Lynch and Shanahan also remain keenly aware that long-term prosperity isn’t going to happen if they don’t ensure the locker room culture is what it needs to be. Which is why, more than anything, it’s not lost on them that the entire locker room is paying attention to who is getting rewarded and who isn’t, regardless of position.

“It creates an atmosphere in that locker room where, hey, if you do your part, you’re going to be taken care of in this building,” Lynch said. “And we’re proud of that.”