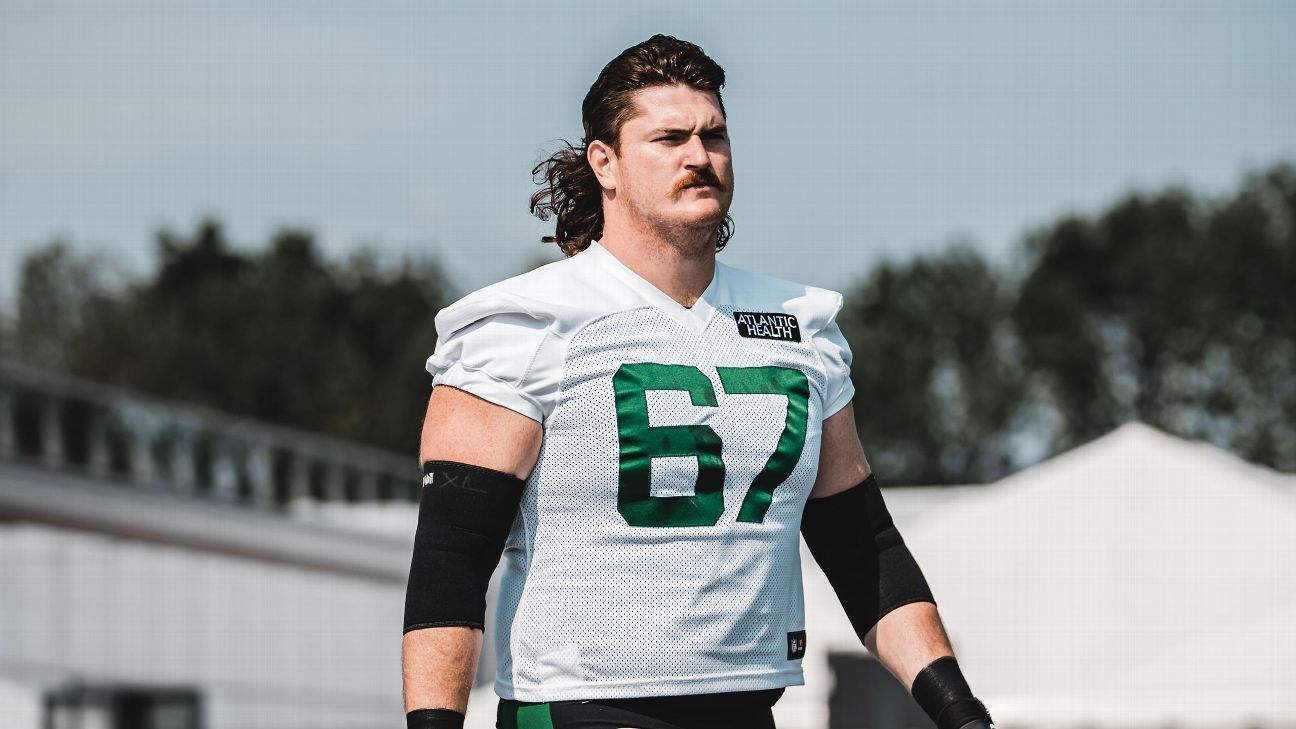 With the first preseason game in the books, the other 30 NFL teams at 2021 training camps are gearing up for the first full slate of games, starting next Thursday.

Friday was a busy day in the league, with two first-round quarterbacks from the 2018 NFL draft making news, a Steelers wide receiver being unhappy with his role and the Titans seeing their prized offseason signing on the field for the first time. There was also a stellar, flowing mullet caught in the wild at Jets camp, plus Gronk being Gronk at Bucs practice.

Here’s what you need to know from training camps across the league:

Jump to the best of the day:
Photos | Nation intel | Videos

Top NFL news of the day

The Buffalo Bills and quarterback Josh Allen have agreed to a six-year contract extension worth $258 million, $150 million of that guaranteed, sources tell ESPN’s Adam Schefter. The Wyoming alum earned the extension after an MVP runner-up season in 2020, during which he set franchise records for passing yards (4,544) and passing touchdowns (37) while leading the Bills to the AFC Championship Game and their first division title since 1995.

Lamar Jackson returned to the Baltimore Ravens facility Friday, but it’s unknown when the former NFL MVP will come back to the practice field. Jackson missed the previous 10 days of training camp, which is the NFL rule for unvaccinated players who receive a positive result. He currently is undergoing testing at the facility under the NFL’s protocol, Ravens coach John Harbaugh said.

Third Giants player to retire from NFL in four days

Veteran offensive lineman Zach Fulton became the third New York Giants player to retire in four days, a source confirmed to ESPN. Fulton had started 44 games the previous three seasons with the Houston Texans. He joined veteran offensive lineman Joe Looney and linebacker Todd Davis among the Giants to recently call it quits. Tight end Kelvin Benjamin also said he was done with football after being released by the Giants last week.

More people play on ESPN than anywhere else. Join or create a league in the No. 1 Fantasy Football game! Sign up for free >>

Raise your hand if you can play offensive line. The Bears — already desperately thin up front with projected starters Teven Jenkins (back) and Germain Ifedi (hip) sidelined — began Friday’s practice with just 10 healthy offensive linemen after rookie Larry Borom entered the league’s concussion protocol. That number quickly shrunk to nine when backup Lachavious Simmons, who had been filling in on the first team, left practice to be evaluated for a possible concussion. All these injuries mean reserves Alex Bars, Arlington Hambright and Dieter Eiselen are likely to see extended playing time when Chicago opens their preseason schedule next week against the Dolphins. — Jeff Dickerson

Second-year WR Marquez Callaway has been one of the biggest standouts through the first week of Saints camp, taking advantage of his opportunity to serve as New Orleans’ No. 1 receiver while Michael Thomas is out for an extended period and Tre’Quan Smith has missed a few days with an unspecified injury that isn’t expected to sideline him for long. Callaway (6-foot-2, 204 pounds) has carried himself with confidence while being a go-to guy for both Taysom Hill and Jameis Winston. As Hill said, when Callaway has an opportunity, “he steps up to it” — just like he did as an undrafted rookie last season with eight catches for 75 yards in a game when Thomas and former New Orleans wideout Emmanuel Sanders were both sidelined. — Mike Triplett

Though Ravens quarterback Lamar Jackson wasn’t on the practice field, running back Gus Edwards returned off the reserve/COVID-19 list and looked leaner while still as strong. During one team drill, Edwards ran over 6-foot-3, 239-pound inside linebacker Otaro Alaka. Edwards, who is projected to back up J.K. Dobbins this season, missed the first seven full-team practices of training camp. “You could tell he was working out,” coach John Harbaugh said. Edwards, who signed a two-year extension this offseason, has produced over 700 yards rushing and 5 yards per carry in each of his three seasons. — Jamison Hensley

The Titans had two positive takeaways on Friday. Edge rusher Bud Dupree was activated off the PUP list and took part in all of practice except for team period. He also got some work in with coach Mike Vrabel during individual period. Dupree said he feels good about how his knee responded. The other positive was cornerback Caleb Farley, Tennessee’s first-round pick in April, taking part in 7-on-7s for the first time. Farley’s length and quickness surfaced on a pass he broke up across the middle. He did a great job staying over top of wideout Cam Batson and got a hand in there to knock it down. Even though it was a good play, Farley said he was disappointed that he didn’t pick it off. — Turron Davenport

Friday was an eye-opening day for Giants sixth-round pick Rodarius Williams. With veteran Adoree’ Jackson getting a light workload, Williams was rewarded for his strong start to camp with some first-team reps. He sure didn’t waste them. Williams tipped a pass intended for Sterling Shepard that was intercepted by Jabrill Peppers and had an interception of his own off quarterback Daniel Jones. It was quite the display for the rookie who has enjoyed a strong start to camp. — Jordan Raanan

Perhaps nobody is looking forward to the first preseason game next weekend more than Kansas City special teams coach Dave Toub, who said the Chiefs released players last season without knowing how good they might be. Toub is eager to get a look at tight end Jody Fortson, a converted wide receiver, and undrafted rookie safety Devon Key. Both have played well in camp. Cornerback Mike Hughes, acquired in a trade with the Vikings during the offseason, will get a shot to return kicks. “We’re going to get him in there to see what he can do,” Toub said. “He’s been real impressive in practice.” — Adam Teicher

It’s unclear if it was a different look the Falcons were going for or something more notable, but rookie tackle Jalen Mayfield moved to the second field for part of Friday’s practice, flipping with Jason Spriggs. Mayfield has been working at right tackle with the No. 1 offensive line throughout camp thus far as Kaleb McGary remains on PUP. Whether or not this is something to really pay attention to will be determined during Saturday’s practice at Mercedes Benz Stadium and also after it when coach Arthur Smith talks with the media. But Mayfield, to this point, has had a good camp — good enough Smith mentioned Thursday that when McGary does return they’ll have to decide whether to keep Mayfield at tackle and let him compete there or have him work inside with Josh Andrews and Drew Dalman to compete for the left guard job. — Michael Rothstein

Winston was discussing how he grades his work during practice, and @JeffDuncan_ asked how would he grade himself going through the Gaunlet:

“Listen, the first time I went through that gauntlet, I blew it up.” 🤣 pic.twitter.com/saecbJ0Wbv

“He loved the players, and loved being around the game. I miss him every day.”@K1 surprised Owner Michael Bidwill with a very special gift in memory of Mr. B. pic.twitter.com/5hF55yoZ6p

First look at Bud Dupree in a #Titans uniform. pic.twitter.com/8gQwiSd21o

Today was Alumni Day up at #ChiefsCamp. It was so fun seeing 18 of our former players from all over the country! @NFLLegends pic.twitter.com/mGqkeA3Bq6