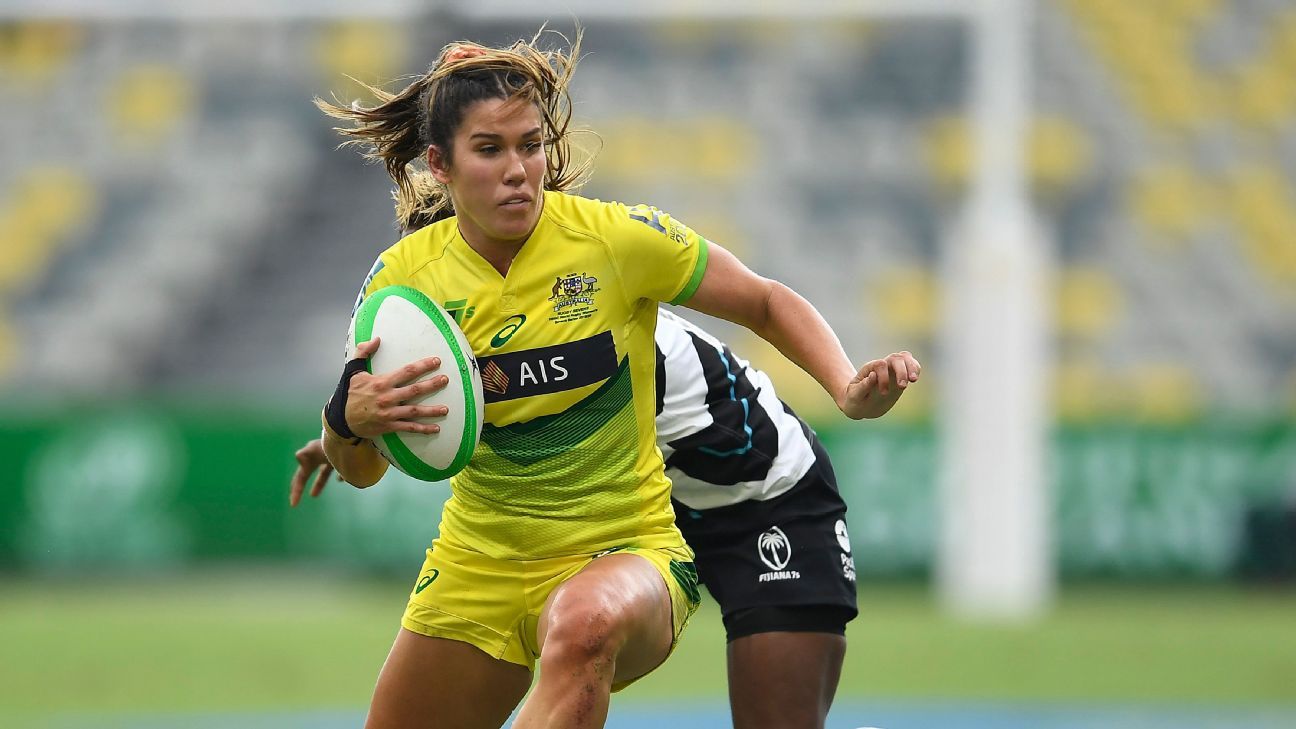 With just days until the Australian women’s sevens team begin their gold medal defence, Charlotte Caslick has no doubt her team is ready for the tough road ahead, despite their lackluster results of late and the shock non-selection of star winger Ellia Green.

Announcing the squad for the Tokyo Games just weeks ahead of their opening Pool match, Australia coach John Manenti made some surprise selections, including the bombshell decision not to include gold medal winning Green on the list.

Green, one of the ‘Golden Girls’ from Australia’s winning Rio 2016 team, had recently made her return to the field after suffering a knee injury, but her performances hadn’t been up to par, according to Manenti, and so he made “the toughest call of his career,” and will leave the 28-year-old in Sydney.

The decision surprised her teammates, who were made aware of the choice just days before the squad was made public, and according to one source, has seen rifts developing with some players not happy with the call. But Caslick rubbished any notion of tension in the team.

“I think a few of the girls were shocked for sure and we’re obviously all really good friends and really feel for each other, so it was heartbreaking to see that,” Caslick told ESPN. “But obviously we’re not in control of who selects the team and we’ve just got to trust that the coaching staff have made the decisions for whatever reasons they have and that that’s going to be the right one.

“There’s no [tension]. Personally, I felt for her and I was devastated for her but we’re part of a team sport and unfortunately this is something that does happen and it’s not the first or the last time that someone’s going to miss out on selection.

Naming a squad mixed with experience and youth, Manenti has included five previous Olympians alongside five who’ll make their Olympic debuts, and in another surprise move, named the uncapped duo Levi and Hines.

The decision to select such inexperienced players could be costly for Australia, but Caslick believes both are ready for a tough debut and have points of difference for the team.

“We’ll be doing everything we can to help them feel comfortable we’ve got a lot of experienced girls within our group that they can bounce ideas off and hopefully that helps them feel more prepared,” she said.

“I’m confident in every girl within our squad. If we have any injuries between now and then there’s going to be other girls that are ready to step up, or the girls who were selected now will definitely be ready to step up as well.

“Madison Levi’s extremely fast, so she’ll be sort of on an edge and be a key finisher for us and then Tia Hinds is like a ballplayer, she’s just got like a great passing game and moves the ball really well and makes really good decisions, so you know they both have a point of difference for our team, but I’m sure they’ll fit in really well and make a great impact.”

Currently training and isolating in Sydney before flying to Tokyo on Monday, the women’s team will arrive 10 days before their opening clash with host nation Japan and newcomers China on Thursday 29 Jul., before they face their toughest Pool opponent, the USA, the following day.

While the USA finished the cancelled 2019-20 World Rugby Sevens series in fifth, three places behind the Aussies at second, they gave the girls in gold plenty of hardship defeating them in the gold medal match at the Glendale tournament, and then in the bronze medal match in Dubai. It won’t be an easy path out of the pool for Australia, but according to Caslick, the Tokyo conditions will play in their favour.

“The USA girls are probably a bit of a dark horse going in,” Caslick told ESPN. “They have got a really strong squad and a lot of potential so we’re definitely not going to be taking them lightly at all.

“They’re a lot bigger than us, probably got a lot of speed. But I think the conditions will probably favor us while we’re over there and I guess we just have to take it game by game. We’ll have certain ways of playing against certain teams, but they’re definitely one that we can’t take easy cause we know that they’re going to be really strong.”

With little game time preparation since the cancellation of the world series, Australia and New Zealand used the trans-Tasman travel bubble to their advantage, playing two tournaments in Auckland and Townsville, where Fiji also took part.

The six-match tournament in Auckland saw the Black Ferns send an ominous warning to their rivals, winning five matches in their first taste of international competition in 400 days. A month later in Townsville, they’d finish the six game tournament undefeated.

Meanwhile for the Australians, their performances would provide plenty of learnings after they were soundly beaten by New Zealand in their two clashes and were shocked by Fiji 19-12 on the second day. It was a harsh reality check just weeks out from the Games, but according to Caslick it has her side ready for a tough Tokyo assignment.

“Yeah there were definitely a lot of takeaways from Townsville. I think hopefully some of the girls learnt that when you don’t stick to the game plan and don’t play the way that we’ve sort of been encouraged to play it won’t work for us.

Follow the teams you love, ignore the ones you don’t. The ESPN App is the best way to get the live scores, news and videos you want ANYWHERE, ANYTIME.

“Things didn’t go quite to plan, so hopefully it was better to learn that in Townsville and not in Tokyo. I’m sure some of those girls won’t be making those mistakes again, and I’ve definitely learned a lot from that tournament.”

If their journey goes according to plan, Australia will likely face the Black Ferns in what will be a Rio 2016 gold medal rematch. However, recent history will be against the Aussies with the team unable to defeat New Zealand in any official tournaments since Sydney 2018, including the gold medal match at the Commonwealth Games on the Gold Coast.

Caslick, who features on Sound Mind Sound Body Stories powered by ASICS available on all major podcasting platforms from July 20, isn’t shielding herself from the dour record, though, instead focusing on what her own team can put together and their belief they can claim a second gold medal.

“I’m very well aware that they are the best team in the world at the moment and they have been for the last two years,” the 26-year-old ESPN. “They’ve got some players within that squad that are unbelievably talented and will probably go down in history as some of the greatest players to ever play.

“I guess it’s like a privilege to be able to play them and try to do our best against them. I’m sure in a sport like sevens, anything could happen and I know we’ve got the squad that can match them and take it to them. But yeah, we’ve just got to focus on ourselves and try to put it all together once more over there.

“We’re super confident and we have a lot of belief within each other and in our squad. I guess we sort have just got to trust the process now and once we get there and take it game by game and show up on the day that matters.”