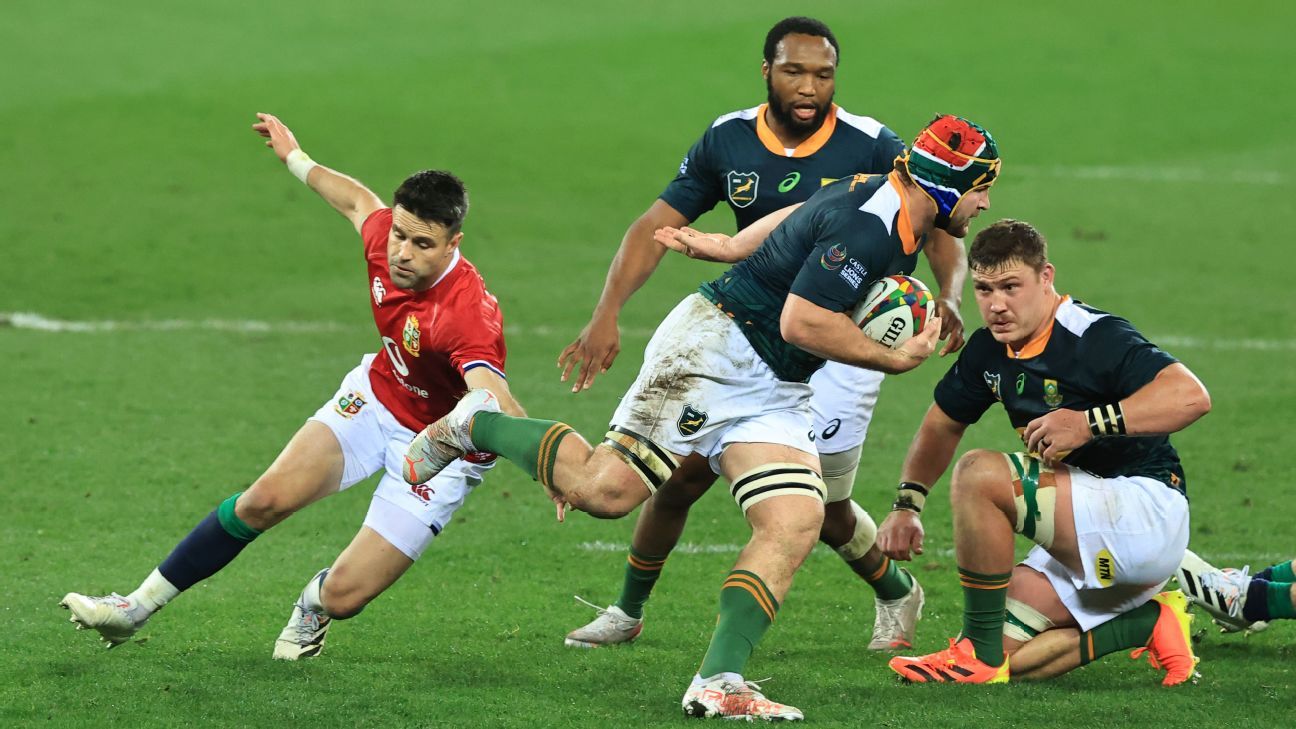 Wing Sbu Nkosi and centre Lukhanyo Am scored first-half tries as a strong South Africa ‘A’ side inflicted a first defeat of the tour on the British & Irish Lions with a 17-13 win in what was dubbed an unofficial ‘fourth test’ in Cape Town on Wednesday.

Lions coach Warren Gatland had said the contest would be a good indicator of where his side are ahead of three tests against the world champion Springboks starting next week, and there will be some concern.

They were better in the scrums and controlled possession through the phases well, but struggled with the physicality of their opponents and were regularly beaten back in the tackle. It will only get harder against the full-strength Boks.

Prop Wyn Jones scored the only try for the tourists, who will get a much easier ride when they play the Cape Town-based Stormers on Saturday in their last game before the test series starts on July 24.

“We needed a hit out against a strong side, the physicality was a different level tonight. We learned a lot of things,” Lions captain Conor Murray said at the post-match presentation.

“But we can be proud, we came back from 17-3 down and corrected things in the second half. It was really physical, we haven’t come up against that yet on this tour and the breakdown will be huge in this series.

“The loss doesn’t mean a lot, we can learn from the first half, that if we start slowly against this side we will lose.”

With 18 members of the Boks’ World Cup winning squad in the match-day 23, it was in truth a South Africa ‘A+’, but they were also a side coming off six days stuck in their hotel rooms last week due to COVID-19 cases in the group and just a handful of training sessions leading into the game.

They were first on the board with an early penalty and then scored the opening try as Owen Farrell’s kick was charged down by Eben Etzebeth and Nkosi was sent on his way in a sprint with the retreating Lions defence.

Liam Williams, who was a late replacement into the side for expectant father Josh Adams, was replaced 14 minutes in by Elliot Daly after a crunching tackle from Etzebeth in what will be a concern for Gatland.

Farrell landed a penalty, but the brilliant quick feet and electric pace of Cheslin Kolbe saw him bamboozle defenders Chris Harris and Louis Rees-Zammit before sending Am away for the second home try.

The home side lost Faf de Klerk and Marco van Staden to yellow cards within a minute of each other just before halftime as the Lions battered their line from close range, but still they held the visitors at bay to lead 17-3 at the break.

The Lions finally made that numerical advantage pay when Jones burrowed over from close range four minutes into the second period.

But the home side finished the stronger and the Lions barely had a sniff of the tryline after that, bar a Rees-Zammit try that was chalked off for a double-movement as he placed the ball.

“I’m proud of the team, we now know where we are at, and we can analyse where we need to improve,” home captain Am said.

“We are happy with the performance and excited to be back in the mix. There is lots to build on. It was a tough outing, we certainly took some knocks and bruises.”