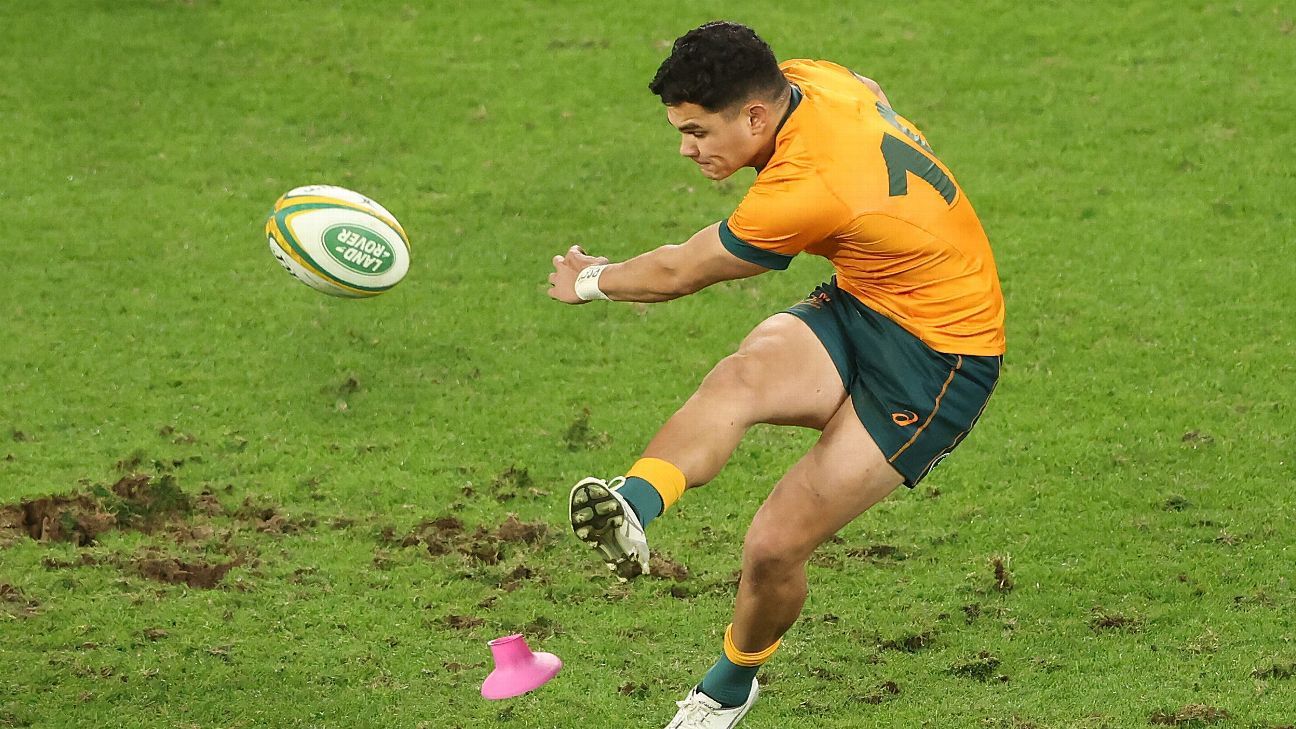 As the Wallabies prepare to fight Marika Koroibete’s high tackle charge at a judiciary hearing, fly-half Noah Lolesio has opened up on the game plan that allowed Australia to run down France and the penalty that secured the 2-1 series win, describing the latter as a “dead duck”.

The Wallabies got back to work on Sunday after their dramatic 33-30 win in Brisbane the previous night, completing a recovery session in the first step on the road to Bledisloe I in Auckland on Aug. 7.

On Monday night they will however turn their focus to Koroibete and the hope that they have the necessary defence to show that his high tackle on France captain Anthony Jelonch deserves no further sanction. The Wallabies will plead both that the initial impact was shoulder to shoulder and that the French No. 8 clearly dropped his bodyheight in a move that should have constituted a “mitigating factor”.

Even if the Wallabies are unable to have the charge overturned, there is a chance Koroibete could still feature at Eden Park should he be handed a shorter ban that allows him to serve the suspension through Melbourne club rugby.

No matter the result of Monday night’s hearing, the Wallabies will head into Bledisloe I buoyed by the knowledge that they can handle difficult situations such as the one presented to them on Saturday night.

And Lolesio, who finished the match with a personal 23-point haul, has revealed how Australia managed the game following Koroibete’s fifth-minute dismissal.

“Obviously with Marika gone we had to play pretty direct. Honestly, I thought our forwards won us that game, they were unreal. So we had to play very direct and play in the right areas, too.

“I thought Tatey’s [scrum-half Tate McDermott] box kicks were on the money and we got some nice contestable [challenges] out of them and we got some turnovers, which was good. So just play in the right areas and play nice and tight and direct, and we knew we were going to get pay whether it was through three points or five.”

Saturday night’s performance was easily Lolesio’s best in the gold No. 10 jersey to date.

The 22-year-old Brumbies playmaker threw the pass that put Hooper through and allowed the skipper to find McDermott for the Wallabies’ opening try, before picking off an intercept himself and sprinting 25 metres for Australia’s second five-pointer.

But it was his nerveless display from the kicking tee in the closing minutes at Suncorp Stadium that will mean he will be hard to dislodge from the No. 10 jersey for Eden Park, even if James O’Connor, who suffered setback in his return from a groin injury last week, is back to full fitness come the Bledisloe Cup.

Lolesio and French fullback Melvyn Jaminet had both kicked supremely all series before the two each traded misses midway through the second half of the third Test. But the Wallabies fly-half steadied and successfully landed two further penalties, even if they perhaps weren’t coming off as sweetly as he would have hoped.

“When the penalty was called, I told Hoops straight away ‘go for the three’,” Lolesio explained of his 79th minute match-winner. “As soon as the whistle was blown, I just really tried to calm myself down and stick to my process because the one beforehand I hooked it a fair bit, so I really tried to trust myself and stay on the 45 [degree angle].

Asked directly about the ball’s rather flat trajectory, Lolesio added: “It was dead duck, mate.”

Lolesio was joined in Saturday night’s starting line-up for the first time by Brumbies and Canberra Vikings teammates Darcy Swain and Len Ikitau.

With all three men having headed south from Queensland, they have now progressed from the National Rugby Championship to Super Rugby and onto the Wallabies together and loom as key components of Rennie’s squad in the years to come.

“It’s awesome, obviously Lenny and Swainy are two of my closest mates, the fact that both of them were on the field with me doing it, it’s pretty crazy,” Lolesio said.

“2017, 2018, we all went through Vikings in Canberra and four years later we’re all playing for the Wallabies in the same team. If you would have told us that back in the day, we would have probably laughed. So it’s awesome to be together.”