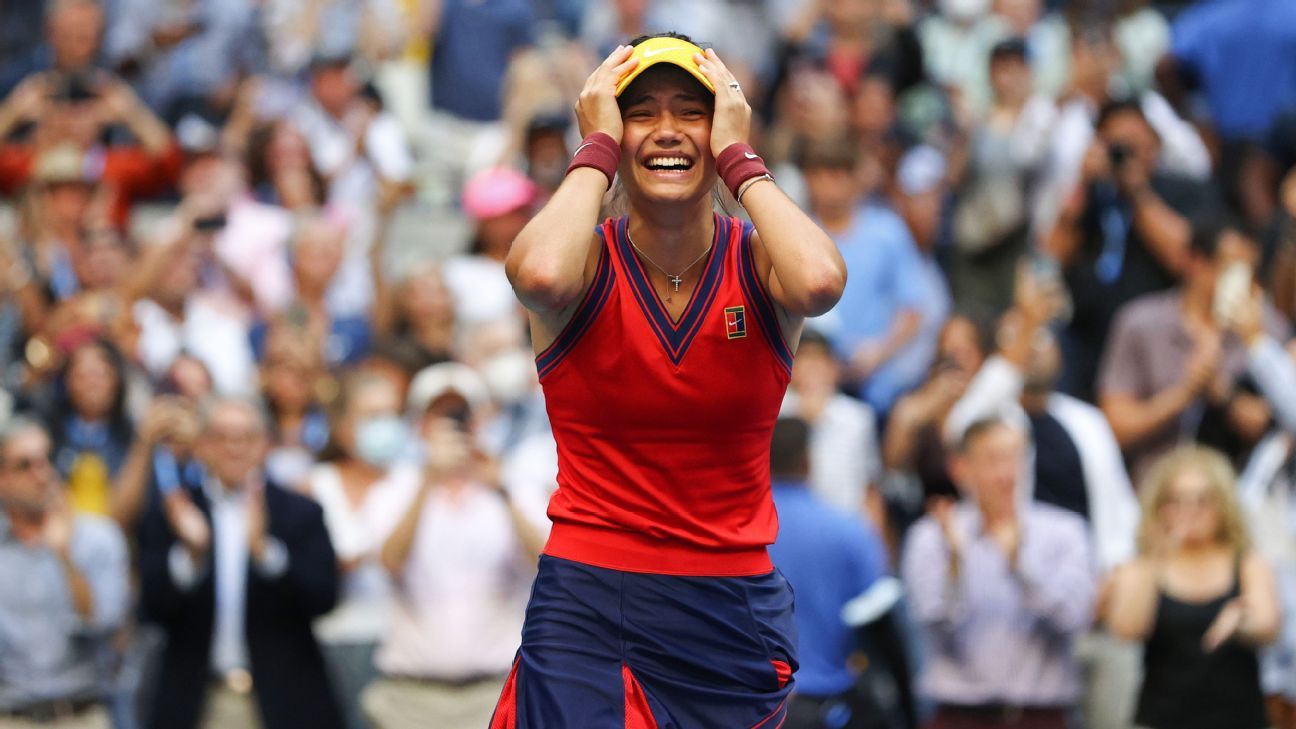 NEW YORK — Emma Raducanu arrived in New York three weeks ago for the US Open qualifying tournament ranked No. 150 in the world and having just played in the biggest final of her career — a Challenger event in Chicago.

She leaves the city as the most improbable Grand Slam champion and a global phenomenon.

It’s been a fairytale summer for the 18-year-old, who was equally focused on her A-level exams in the spring as she was on her tennis career. She made her WTA main draw debut at Nottingham in June — as she was waiting for her school test results — and then received a wild card for Wimbledon. Raducanu then stunned the tennis world with her run to the fourth round at the All England Club before retiring mid-match due to dizziness and difficulty breathing.

But it turned out that that was just the beginning.

She rolled through the US Open qualifying field, and then the main draw. During her 10 matches, including Saturday’s final against giant-slayer Leylah Fernandez, she never dropped a set. Raducanu dominated all of her opponents with her fearless game style and unbreakable resolve and became the only qualifier to win a major title in Open Era history as well as the first British woman to do so since 1977.

In a span of less than three months, she’s climbed from 338 in the rankings to 23 and her $2.5 million payday was more than eight times her total career earnings. Queen Elizabeth II was among those to publicly congratulate her. Having become known for her laidback attitude off the court, Raducanu finally seemed to take in the full weight of what she achieved as she lay on the ground staring at the sky after having won the final point as the raucous crowd at Arthur Ashe Stadium showered her with an ovation.

Raducanu is suddenly the sport’s latest Next Big Thing and further proof of tennis’ bright future, but in the constantly changing world of women’s tennis, what happens next for her — and Fernandez, a rising star in her own right — is anybody’s guess.

“The sky’s the limit for Emma, and for Leylah, but I don’t want to put any extra pressure on them,” said Chrissie Evert, the 18-time major champion and ESPN analyst. “We’ve seen other careers that have looked unstoppable but haven’t lasted very long … Who knows what’s going to happen when the target’s on their backs or with this level of attention?”

The emergence of Raducanu and Fernandez, 19, has been one of the predominant storylines of the tournament, even at times outshining Novak Djokovic’s attempt to join tennis immortality by achieving the Calendar Slam and his record-setting 21st title.

Fans at the event and around the world have been astounded by the poise and unwavering self-belief of both teenagers. With multicultural backgrounds and several countries each claiming some stake in both, Raducanu and Fernandez have gone from virtual unknowns to overnight sensations in less than two weeks. It’s been a meteoric rise for both, but especially Raducanu, who has yet to even record a win in a WTA tournament.

Their meeting in the final was the first all-teenage title clash at the US Open since Serena Williams and Martina Hingis in 1999. The excitement of the crowd was palpable, as the chair umpire frequently had to ask those in the stands to be quiet or sit down.

But while they were the first teens to square off with such high stakes in New York in over 20 years, there have been other youngsters to hoist trophies at majors in recent years. Bianca Andreescu and Iga Swiatek were both 19 when they won their titles at the 2019 US Open and 2020 French Open, respectively, and Naomi Osaka and Jelena Ostapenko were 20 for their first Grand Slam victories.

All four, as well as then-21-year-old Sofia Kenin at the 2020 Australian Open, looked poised for superstardom and immediate tour-level dominance. Yet Osaka remains the only one to have won another major title.

“You just don’t know about the future,” said Rennae Stubbs, the four-time major doubles champion and ESPN analyst. “I mean, look at the number of players we’ve seen — Bianca, Kenin, Ostapenko. I mean, these were all teens or in their early 20s that won a Grand Slam recently. And they didn’t just win but they did it in a way that we thought maybe they were the next one. So we all hold our breath now.”

The parity and depth in the women’s game has never been deeper, and anyone ranked in the top 100, or beyond, is capable of beating anyone else on any given day. Raducanu and Fernandez’s performances over the fortnight more than exemplified that, even if it’s certainly nothing new.

There have been 14 different major champions in women’s tennis since the start of the 2016 season. By contrast, there have been six men to do so in that time span, and just four since the beginning of 2017. There were four first-time women’s semifinalists at the French Open in June, and eventual champion Barbora Krejcikova had been unseeded and playing in just her fifth main draw at a Grand Slam.

Osaka has been increasingly vocal about the toll of fame and the struggles she’s had since winning her first major at the 2018 US Open. After withdrawing from the French Open earlier this summer, she revealed she had “long bouts of depression” since the breakthrough victory. She’s since won three other Grand Slam titles and become the highest-paid female athlete in the world due to a staggering business portfolio and overwhelming global popularity, but her story is perhaps in many ways a cautionary tale.

“I hope they take everything slow,” Evert said of Raducanu and Fernandez. “I hope they have good people and a good team around them. I hope they continue to work on their game and have normal lives and are able to still be a teenager and not get bogged down with endorsements and tournaments and appearances and stuff like that.

“We’ve seen too many bad scenarios. It’s going to be all about the people they surround themselves with. Fame comes at you fast, and it’s all new and exciting, and we don’t know what’s going to happen when they feel more pressure or when they lose a few matches. We just don’t know how they’ll react to everything. Success can be deceiving and I hope they’re prepared.”

Fernandez, who beat Osaka as well as former US Open champion Angelique Kerber and top-five players Elina Svitolina and Aryna Sabalenka en route to the final, will also reach a new career-high ranking on Monday as she enters the top 30. She became a crowd favorite in New York, and will most certainly have a slew of new opportunities awaiting her.

For both players, things will dramatically change going forward as they will suddenly have main draw entry for any tournament they wish to play and an increased amount of attention. But Fernandez said she didn’t think things would be much different going forward.

“I don’t think it will change my life that much,” Fernandez said after the match. “I’m very lucky to have a great support team and a great family to keep me grounded. With these wins and this loss today, it definitely stings, but it will just make me want to work harder and stronger, [and] just come back to every tournament with the same hunger that I came into this tournament.”

Of course, there’s a sizable difference in status between Grand Slam finalist and Grand Slam champion, and Raducanu will now have unprecedented demands for her time and be the subject of the relentless glare of the British press.

The future remains uncertain — perhaps for her more than any previous champion — but on Saturday night anyway, Raducanu wasn’t fazed by the expectations or what lay ahead.

“I definitely think it’s the time to just switch off from any future thoughts or any plans, any schedule. I’ve got absolutely no clue. Right now, no care in the world, I’m just loving life.”