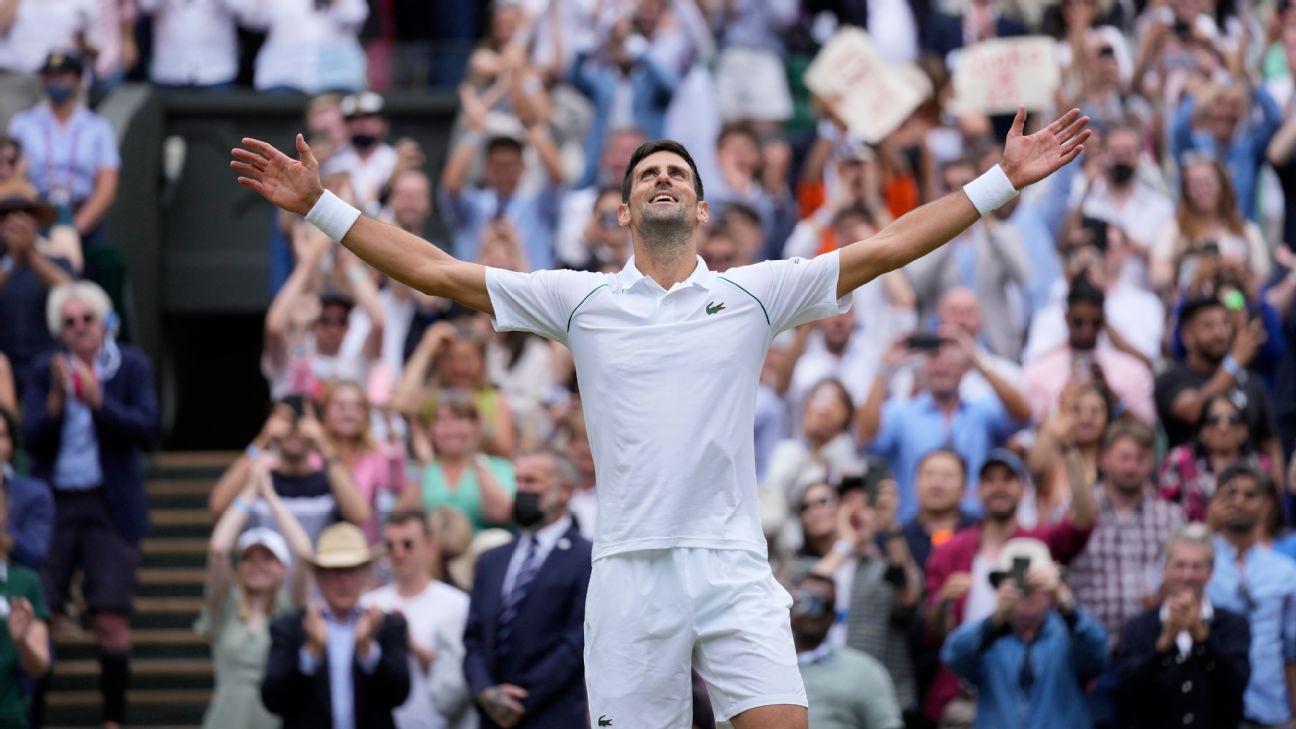 You have to go back to the 1960s to find a comparison for what Novak Djokovic is accomplishing in 2021.

In the ’60s, tennis was trying to figure out the cleanest way forward as tournaments were split into professional and amateur events (and “amateurs” sure seemed to be making pretty good money to account for their “expenses”), finally electing to open all events to professionals beginning in 1968. So began tennis’ “Open era.”

On both sides of the Open era dividing line, Rod Laver dominated. He reached the finals in 10 of 12 Grand Slam tournaments (held for amateurs) from 1960 to 1962, winning six. He took all four of them in 1962, then moved on to dominate the professional ranks, winning seven of 15 majors on the pro side over the next five years. Once again eligible to play the Slams beginning in 1968, he proceeded to win Wimbledon that year, then win all four again in 1969.

Since Laver took down fellow Aussie Tony Roche in four sets to win the 1969 US Open and his second full-year Grand Slam, no man had won even the first three Slams of a given year until Djokovic took Wimbledon on Sunday. Only Bjorn Borg (1978-80), Mats Wilander (1988), Jim Courier (1992) and Djokovic (2016, 2021) had managed to win the first two. Even in this era of dominant oligarchy — Djokovic, Rafael Nadal and Roger Federer have combined to win 60 of the past 72 Slam titles — we’re currently in uncharted waters.

Djokovic is on the third great run of his illustrious career. He won four of five Slams in 2011-12 and six of eight in 2014-16, and he’s now on an 8-of-12 run going back to his 2018 Wimbledon win. If he wins the US Open, he’ll be the first player since Laver to win all four in a calendar year. If he elects to play in the Olympics and wins that, too, he’ll take the first men’s Golden Slam.

YOU CAN MAKE a pretty strong case that Djokovic is the surest thing in men’s sports right now. You can also make the case that the next generation is catching up to him, however.

Denis Shapovalov was struggling to contain his emotions as he walked off the court following his 7-6, 7-5, 7-5 loss to Djokovic in Friday’s Wimbledon semifinals. It was his seventh loss to Djokovic in seven tries, but this one felt more disappointing because, as he told the media after the match, “I felt like the game is there and it’s possible to go and play for the trophy. It’s a feeling I’ve never had before, so that’s why it just hurt so much. I felt like I was outplaying Novak in parts of the match. If you’re outplaying Novak, you can beat anyone.”

Sure enough, he has shown clear progress against the Serbian No. 1. In their first four meetings, all in 2019, Shapovalov won just 40% of the points. He took a set off of Djokovic in their first meeting, in the 2019 Australian Open, but he won an average of just 2.7 games in the other nine sets.

In their three meetings since the start of 2020, however, the 22-year-old Canadian has won 47% of the points. He took another set from Djokovic in their 2020 ATP Cup quarterfinal battle, and their past six sets have all reached at least 5-all. The problem: Djokovic won all six sets, four at 7-5 and two in comfortable tiebreaker wins. The first two sets were particularly even, but Djokovic won nine of 11 total break points, both fending off an improving Shapovalov return game and stealing break chances when he got them.

It’s a familiar problem for tennis’ most proven young stars. On the bigger stages, no one can close the deal.

French Open finalist Stefanos Tsitsipas, 22, had won 44% of points against Djokovic in 2019 and pre-stoppage 2020, and has won 47% since, twice taking Djokovic to five sets at the French Open. But he lost both fifth sets.

US Open finalist Alexander Zverev, 24, won 44% of the points against Djokovic in four meetings in 2018-19, then improved to 48% in three meetings since. But he has taken only one of seven sets from Djokovic in Grand Slams.

Wimbledon finalist Matteo Berrettini, 25, has played Djokovic three times and went from winning 34% of their points in the first battle to 45% in the second and 48% in the third. He won the first set on Sunday, but Djokovic ground out the next three.

Australian Open finalist Daniil Medvedev, 25, has actually won three of his past five matches against Djokovic, but while he has taken 49% of points in all their matches, he has won only 46%, and one of seven sets, in two Grand Slam battles.

Along with seventh-ranked Andrey Rublev, who has somehow still never played Djokovic, Medvedev, Tsitsipas, Zverev, Berrettini and Shapovalov make up tennis’ next wave. They are all between 22 and 25 years old and all are in the current ATP top 10.

They’re also a combined 0-10 against Djokovic in Slams.

If you squint, you can see progress. Aside from Medvedev — who, again, has had quite a bit of success against Djokovic overall — the other four players fared better against him in their second Slam meetings than in their first. Shapovalov won 43% of points in the second round of the 2019 Australian Open and 47% in the 2021 Wimbledon semis, Zverev won 43% in the 2019 French Open quarterfinals and 48% in the 2021 Australian Open quarters, etc.

In a sport with the tiniest possible margins, where losing 40% of your points means you win in a blowout and losing 45% still all but assures victory, a shift of even two percentage points can turn fate around. After winning 56% of points against these players in 2019, Djokovic has won only 53% since. But in the biggest points and the biggest matches, he has retained the edge.

THE NEXT STEP for the next generation might be the hardest one. “In important moments I think I probably held my nerves better than he did and just make [sic] him play an extra shot, make him do an unforced error,” Djokovic told the media after his win over Shapovalov.

“The more matches you play and the more times you’re in these similar situations,” he continued, “the more confident or more comfortable you feel [the] next time you get to face these particular circumstances”

Over the next five years, Djokovic would win six of 10 Slam meetings between them. Since the start of 2013, he has won all six.

It was the same story against Nadal. The Spaniard won 14 of their first 18 meetings from 2006 to 2009, including all four in Slams. Djokovic won three straight in 2009, but Nadal remained superior in best-of-fives, taking the 2010 US Open final in four sets.

The message: It takes time. The sport’s greats are too well-developed, too far along in the mental game to wilt at the sight of a hot, young up-and-comer, and you have to learn from losing to them before you can beat them when it counts the most. No one knows that better than Djokovic.

“[Federer and Nadal] helped me realize what I need to do in order to improve, to get stronger — mentally, physically, tactically,” he said in an on-court interview after his Wimbledon victory. “When I broke into the top 10 for the first time I lost, for three, four years, most of the big matches that I played against these two guys, and something shifted, end of 2010, beginning of 2011, and last 10 years [have] been an incredible journey.”

Of the six 25-and-under players in the top 10, four have now reached Slam finals, and a fifth (Shapovalov) enjoyed a semifinal breakthrough at Wimbledon. Rublev has made three of the past five quarterfinals, losing to a fellow top youngster each time (Medvedev twice, Tsitsipas once). They’re hunting in a pack, and they’re as close to making a breakthrough as Djokovic is to pulling a Laver.

Djokovic might be in the form of his life, but the margin for error is getting smaller and smaller.